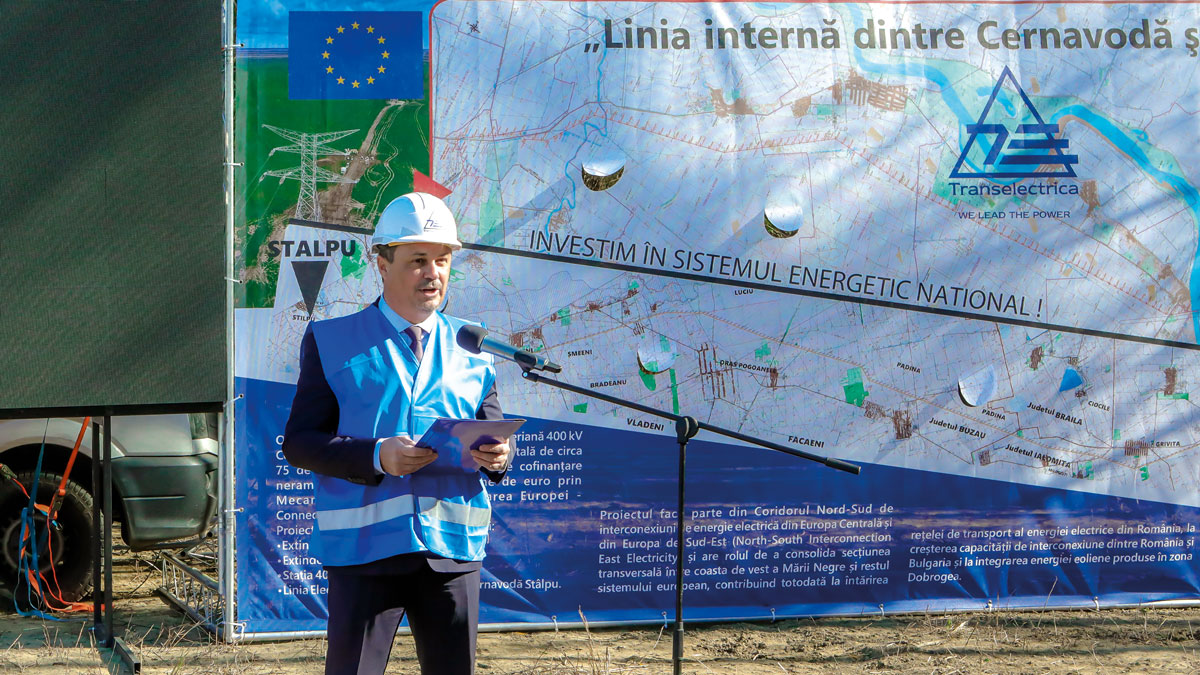 The construction project of the 400 kV Cernavoda-Stalpu overhead power line has successfully passed its most difficult and demanding technical stage, namely the crossing of the Danube over a distance of 2.6 kilometers, of which 1.13 kilometers are above some water.

The uniquely complex engineering process was carried out by the construction teams of Electromontaj SA, in the presence of the management of Transelectrica, Electromontaj The general manager of SA Ionut Tanasoaica, the deputy secretary general of the government and member of the supervisory board of Transelectrica Alexandru-Cristian Vasilescu, the secretary of state at the Ministry of Energy George Niculescu, the president of the commission for industries and of the Chamber of Deputies Bende Sándor, and official representative of the European Executive Agency for Climate, Infrastructure and the Environment (CINEA) Ona Kostinaite-Grinkeviciene – Head of Sector CEF.

“I am honored to be here with you today to celebrate this historic milestone and I am also very happy that in 2017 we granted Transelectrica this co-financing of 27 million euros so that this project could be carried out. This line is a very important project for us, it has an important energy dimension for us, and I believe for us and for all of Europe. I can tell you that the recent Russian aggression against Ukraine has reshaped our lives. Now, more than ever, we need funding for electricity. I know that this journey for you and for all of us has not been very easy. Therefore, I want to thank everyone who made this possible. The construction infrastructure is not easy. Congratulations on completing this part of the infrastructure! Ona Kostinaite-Grinkeviciene – CEF Sector Manager, said

“We are witnessing the completion of a masterpiece that marks the technological evolution and development of the electricity transmission network, which is why I thank the builders and the specialists of the Company who made this possible thanks to their effort, dedication and professionalism. This project closely reflects the complexity of the infrastructures managed by Transelectrica, with all the challenges, from the technical design to the energization, whether it concerns power lines crossing the Danube or crossing mountains. We understand the urgency of extending the electricity transmission network to ensure national and regional energy security and that is why we have planned investments of around 2 billion euros for the next decade. It is an ambitious plan, but absolutely necessary for Romania,” said Gabriel Andronache, CEO of Transelectrica.

A large part of Transelectrica’s team of technical specialists who have contributed significantly to the implementation of the investment over the years participated in this historic stage: project managers and supervisors, site managers, engineers, as well as representatives of the specialized departments within the company which ensured the realization of the investment.

The stage of crossing the Danube lasted about three weeks, including the preparatory phases. Its complexity and uniqueness required special efforts from Transelectrica’s subcontractors and expert teams, being the first large-scale electrical engineering works carried out in the Romanian transmission network in the last 35 years. The double-circuit overhead power line is supported on both sides of the Danube by the highest high-voltage pylons – 150 meters – of the entire national energy infrastructure.

The only work of this type crossing the Danube was built in 1987, the 400 kV Cernavoda-Gura Ialomiței OHL.

The infrastructure target of the Cernavoda-Stalpu 400 kV overhead power line, an investment of a total amount of approximately 75 million euros, benefits from a non-reimbursable co-financing of 27 million euros through the Connecting Europe Facility (CEF). The project is part of the Eastern Electricity Corridor of the North-South Interconnection and aims to strengthen the cross-section between the western Black Sea coast and the rest of the European system, while contributing to the reinforcement of the electricity transmission network by Romania, by increasing the interconnection capacity between Romania and Bulgaria and integrating wind energy produced in the Dobrogea region.

Request refused to continue work on the CMP transmission corridor