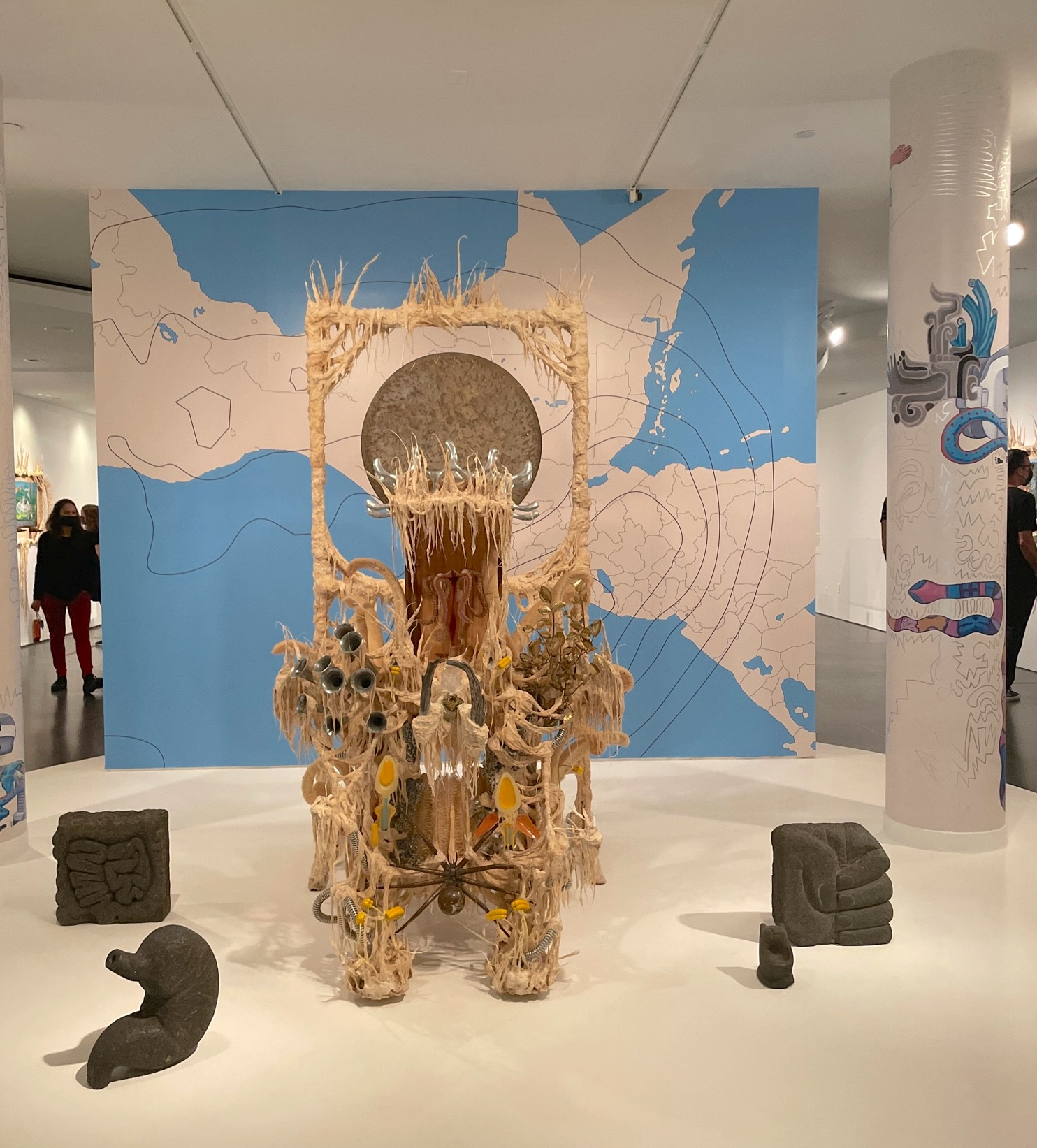 My first encounter with the work of Salvadoran-American artist Guadalupe Maravilla was actually missed: I was unable to participate in the sound healing session that accompanied the artist’s installation at the Museum of modern art (it was full) and I just glimpsed through the glass doors, amazed visitors to the museum fall asleep on the floor in meditative nirvana. Given such an almost Zen-like backdrop, I was unprepared for the sheer fear of Maravilla’s solo exhibition at the museum, Tierra Blanca Joven — its premiere in New York — at the Brooklyn Museum, organized by seniors Guadalupe MaravillaCommissioner Eugenie Tsai. The presentation resolutely exploits the otherness of the disease, without ever yielding to the notion of suffering as a totalizing narrative. As medicine increasingly pretends to expunge pain through its technological and chemical forces and as the pharmaceutical industry produces spin-offs in well-being and lifestyle, Maravilla invites viewers to recognize pain as one of the elementary forces of life.

The exhibition, titled Tierra Blanca Joven – which means “young white ash/earth” in Spanish, alluding to the concept of renewal through burning – consists of free-standing sculptural works, videos, multimedia pieces, drawings on walls and pillars and a small group of pre-Columbian artifacts from the museum’s collection, selected by the artist and displayed in glass cases. The focal points of the exhibition are three sculptures: “Disease Thrower “#18” (2021), located at the entrance of the only first floor gallery that houses the exhibition, “Disease Thrower #12122012” (the date which Maravilla learned he had cancer) and “Disease Thrower #0” (both 2022) upon release.

With throne-like shapes, pointed ends, hardened organic material, and numerous protrusions, the “launchers” initially appear quite ballistic. A closer view reveals other chimerical elements: for example, in “Disease Thrower #18”, the porous loofah octopus-like tentacles and found objects such as metal roses and a large bronze spider at the base. Maravilla indicates in a wall text, reproduced from his conversations with Tsai, that “Disease Thrower #0”, which includes a rattan mat in the middle, could theoretically be crawled over – like a protective nest or a healing womb, i imagine (the text on the wall mentioned that participants could lie on it, although there were no instructions to do so). Meanwhile, the sculpture’s black hue, the result of the artist’s application of ashes collected from previous ritual fires he lit during performances, and the work’s metal chains, as well as other idiosyncratic details evoke a myriad of references: amulets and Mayan objects alluding to the passage to the underworld, but also fetishes and surreal death masks, and contemporary fantasy spawned by Thor.

Maravilla calls the Disease throwers “healing devices”. They are not mechanical, but the word “machine” captures the special enchantment that emanates from them – with their wonderfully handcrafted fusion of organic and inorganic forms, they remind viewers that techne is not a modern invention and evokes the spiritual powers of ancient technologies. The gongs present in the three sculptures were not activated in the exhibition, but I imagine that their sound extends this invitation, imbuing the bodies with vibrations. “Disease Thrower #0” features an LCD screen that plays video of an extreme close-up of a looping cat’s eye. Maravilla mentions the animal’s purring as healing (it’s his cat), but the video’s electronic choral soundtrack is weirder and more striking, suggesting the beast sees more than we can comprehend. Perhaps, like the blinking cat’s eye, one can only see the underworld; to see more, to know more, is to risk too much.

The power of spirits to enchant the world – and the human propensity to be enchanted by it – is evident throughout the show. In one of the cases, a god springs from a flower in a Mayan ceramic whistle; the musical instrument embodies a human relationship with the occult that relies on intermediaries. Other prehistoric examples selected by Maravilla include trumpets, conches, and ritual vessels in the shape of animals and humans. In the splendid, diminutive “Figurine of a Woman Sheltering a Man” (600-800 CE), which she makes in the folds of her stomach, the strange literalness of the composition suggests female fertility. But the doubleness of the figure – one body cradling another – also indicates the complexity of the being.

Allusions to numerology permeate the exhibition, often rooted in personal experience, such as in the numbers in “Disease Thrower #12122012,” which refer to the artist’s illness. Numerology is also referenced with the game of tripa chuca, in which players connect pairs of numbers by drawing lines on a sheet of paper without touching any other numbers or lines. The sinuous pattern that results from such a game – which the artist played as a child – is reproduced in the exhibition by the artist and a collaborator, the artist Ernesto C., on the bases of the glass showcases, as well as on walls and pillars. It creates a labyrinthine route to guide the movements of visitors, but also suggests that Maravilla draws on her Salvadoran childhood and heritage for continuity and sustenance, viewing the entry points in her biography not as singular but as part of ‘A model.

The illness highlights other motives in the artist’s life, including political unrest and immigration. Born in El Salvador in 1976, Maravilla came to the United States via Mexico as an unaccompanied minor. He was eight years old, a refugee from his country’s civil war who took away some of his family. (One work reveals that Maravilla’s father fled after seeing his brother’s decapitated body hanging from a tree.) An excerpt from the conversation between the artist and the curator, reproduced on the wall, fleshes out the tripa chuca connection: “Many of us have made the trip from Central America to the United States, but many children have not. I was one of the blessed ones who managed to pass. Just like the game, the migration is done the same way.

In the cruel game of chance, the artist turns to the stories he carries. His retables, oil-on-tin paintings made in collaboration with Mexican painter Daniel Vilchis, framed with wood cotton and glue rims that visually rhyme with the spiny forms of the pitchers, are replete with mountainous landscapes and Mayan archaeological sites that Maravilla explored in his childhood, and views of volcanic eruptions. One can imagine that the seeds of Maravilla’s art were planted with the first sightings of these powerful and destructive “launchers”, spitting lava and rejuvenating the land. Driven by a strong sense of what it means to be a survivor, Tierra Blanca Joven translates the galvanic energies of the earth into the primordial quiver of the body.