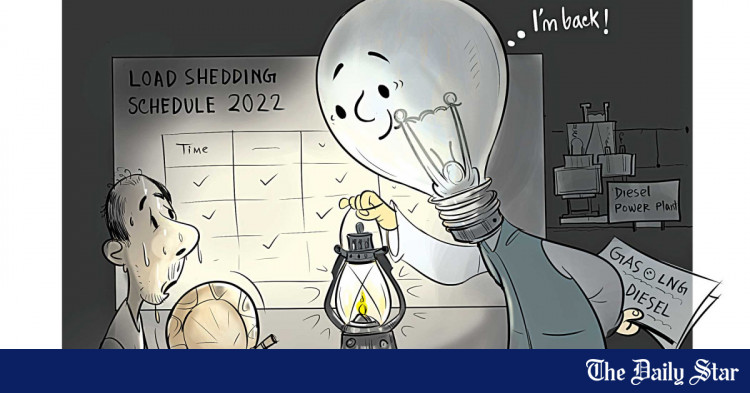 We are now more than halfway through October. In July, Nasrul Hamid, the state minister for electricity, energy and mineral resources, said the country’s then ongoing power cuts would not last long. He wrote on his verified Facebook page: “In the next few months, the second unit of Payra Power Station and Rampal Power Station will come into operation. In addition, 1,600 MW of electricity will soon be imported from the power station. Indian power plant from Adani. All of this will add more than 4,000 MW of electricity to the national grid.”

In the same month, Tawfiq-e-Elahi Chowdhury, energy adviser to the Prime Minister, assured that people would be relieved of load shedding from September according to the same logic. At that time, this newspaper quoted experts who had questioned their assertions. They asked what would be the use of increasing electricity generation capacity, when the resources needed to generate electricity were lacking – coal, for example. No one in the government batted an eyelid.

For all the latest news, follow the Daily Star’s Google News channel.

In August, Minister of State Hamid said again: “The electricity situation will improve next month. [September]. “September came and went, but the load shedding problem remained. None of the three new power plants that were ‘planned’ to ‘save us’ from load shedding have started operating.

On October 7, the Minister announced that load shedding had decreased compared to before, but that “about 700 to 800 MW per day” was still missing. According to data from the Power Grid Company of Bangladesh Ltd (PGCB), however, both of its claims were inaccurate. On that day (October 7), the power outage was 964 MW, or 8% of the total demand. And people have already suffered from more load shedding in October than the previous month.

This all reminds me of a quote from George Orwell’s prophetic novel. 1984“The Ministry of Abundance forecast had estimated boot production for the quarter at 145 million pairs. Actual production was 62 million. Winston, however, in rewriting the forecast, reduced the figure to 57 million, from so as to permit the usual assertion that the quota had been exceeded. In any case, 62 million was no closer to the truth than 57 million, or than 145 million. It is very probable that no boot had been produced at all.

To Nasrul Hamid’s credit, he only came out three days later (October 10) and admitted that the load shedding had gotten worse. “We hoped that from October there would be no load shedding, but we failed because we did not find a solution to the gas shortage.” (Remember how experts warned that resource supply for power generation was one of the main issues?) Hamid added, “I hope the situation will improve next month.” He has now set a new deadline for improving the load shedding situation, but with less confidence than before.

But what of those who have claimed for years that the Awami League government’s energy policy over the past decade has been flawless? Were they not the same ones who also condemned anyone who identified flaws in it – such as the folly of paying exorbitant amounts of capacity charges to owners of idle power plants, while ignoring the need to modernize our transmission infrastructure? electricity, and the government’s refusal to explore national gas reserves, despite the fact that at least two studies by foreign institutions (with superb track records) have estimated the presence of a significant amount of gas reserves in Bangladesh?

Will they come forward and admit they were wrong? Or do we stuff their past boasts into Orwell’s “memory hole”?

For years, a particular issue that ruling party loyalists have regularly bragged about is how the party has transformed the country from a country that experienced hours of power cuts before it came to power, to a country where there are has very little (or nothing). In March this year, the government held a celebration touting the country’s 100% electrification. Just a few months later, Dhaka residents who attended the celebration were shocked to discover frequent power cuts not only during the day, but also at night – outside of the advertised load shedding schedules.

Over the past decade, the government has spent thousands of taka crores in the energy sector. The fact that we are now returning to the experience of load shedding as we did over 10-12 years ago is shocking. What happened to those thousands of taka crores? What have they achieved, other than increasing our production capacity, half of which we can’t use, and making a few (politically well-connected) people and companies who have won favorable government contracts extremely wealthy? Has corruption eaten away most of those thousands of taka crores? If not, why has the government needed compensation laws in the electricity sector over the years, and why was a recommendation recently made to a permanent parliamentary committee to indemnify the officials of the state-owned company Petrobangla from legal proceedings?

Recently, the Office of the Comptroller and Auditor General (CAG) revealed that the government (in reality, the people) had been deprived of around Tk 4,697 crore for 19 counts of irregularities by Bangladesh Oil, Gas and Mineral Corporation (Petrobangla) and Bangladesh. Oil company. Irregularities include spending beyond the rules to purchase goods and services at high prices; flouting the instructions of the Ministry of Finance and the National Board of Revenue (NBR); and in disregard of the Gas Sales Rules 2004 and 2014, Bangladesh Gas Act 2010, Bangladesh Energy Regulatory Commission, Public Procurement Act 2006 and Rules of 2008 on public procurement.

The general lack of transparency in our energy sector over the years – which is really a microcosm of the general trend of this government – ​​has cost the nation dearly. And the government is now trying to pass the cost of its irregularities onto the people – which is another of its common tendencies. But the people must resist. It’s time to investigate past government decisions, to really identify what went wrong and what the irregularities were. Otherwise, there will be no way out of the crisis in which we find ourselves; in fact, it could only get worse.