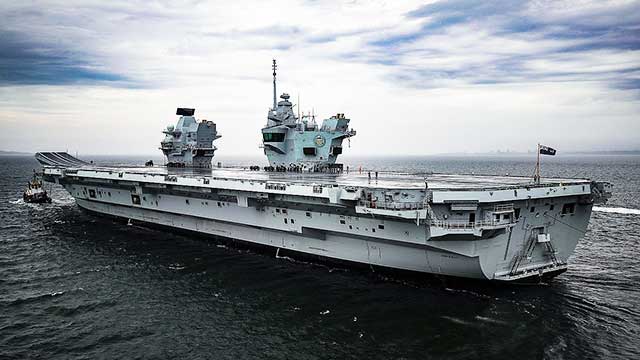 LONDON ($1 = £0.90) — The British aircraft carrier HMS Prince of Wales sailed to Scotland for repairs. The reason is a mechanical failure in the right propeller shaft. According to experts, such repair of such damage can be carried out in the ship’s drydock, which is located in Rosyth Dockyard, Scotland.

The damage is not from now, but from mid-August off the Isle of Wight. It was this damage that put the aircraft carrier out of service, and London was forced to send sister ship HMS Queen Elizabeth. Off the Isle of Wight, British and American sailors conducted joint training and operations, also involving F-35B Lightnings, MV-22 Osprey tiltrotors and drones.

After being returned to Portsmouth, HMS Prince of Wales was inspected by divers and expert naval architects and engineers from Babcock. Babcock is a British shipyard which is the executor of dozens of orders relating to the naval forces of Great Britain. The company also manages the Rosyth shipyard.

In Scotland, the ship will also be inspected. Only then can more clarity be given about his stay in the drydock. The goal, according to the carrier’s command, is to quickly return the ship to service and military operations. The starboard propeller shaft weighs 33 tons and has already been removed from the ship.

HMS Prince of Wales sails with a full crew to Scotland. There is no reason for the repair to interfere with crew training and training, the UK Ministry of Defense said. Part of the training provided involves all of the ship’s systems and the performance of each sailor’s operational roles.

HMS Prince of Wales is a brand new British aircraft carrier. It was launched in 2017 and in 2019 the British Navy acquired it. Its displacement is more than 65,000 tons. It is armed with three Phalanx CIWS, four DS30M Mk2 30mm cannons and six M134 Minigun American 7.62×51mm NATO six-barrel rotary machine guns.

Currently, the ship carries up to 36 fifth-generation F-35 fighter jets and 14 helicopters. However, it is designed to carry at least 65 fighters and helicopters. Maximum cruising speed is 25 knots.

Follow us anywhere and anytime. BulgarianMilitary.com has a responsive design and you can open the page from any computer, mobile device or web browser. For more up-to-date news, follow our Google News, YouTube, Reddit, LinkedIn, Twitter and Facebook pages. Subscribe to our newsletter and read our stories in News360App in AppStore or GooglePlay or in FeedlyApp in AppStore or GooglePlay. Our standards: Manifesto & ethical principles.