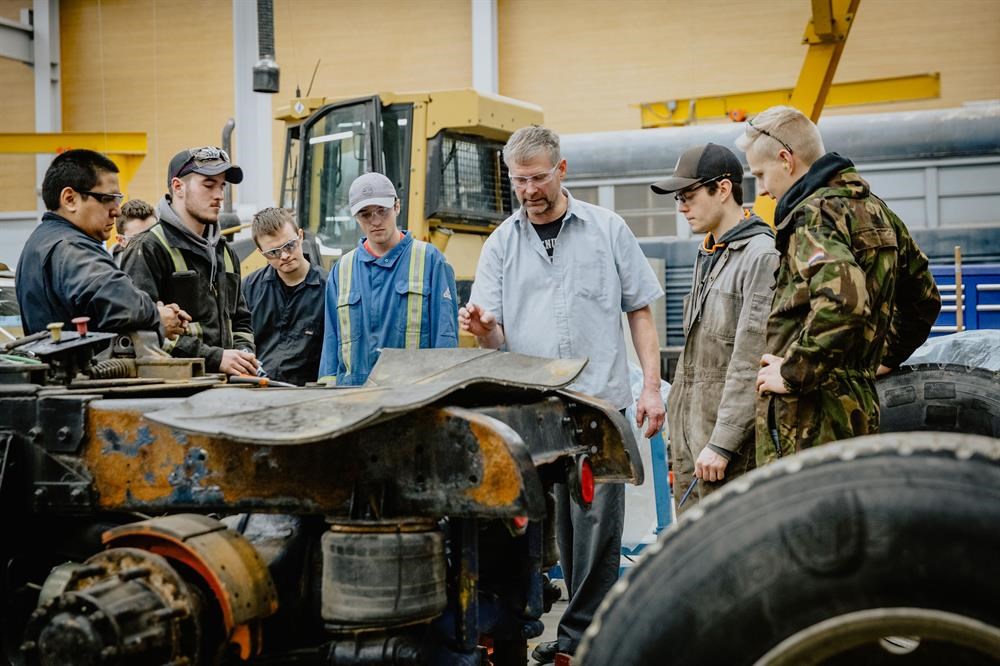 The pandemic that has forced educators to scramble to design new teaching methods is having a lasting effect that will improve the way New Caledonia College students learn.

During the lockdown period, when students were forced to stay home and use computers to connect to classrooms, one of the college’s automotive service technician instructors came up with a method of using his phone’s camera to replicate what he saw while working under a car. Now he projects the video on a big screen for all the students in the store to see, instead of them crowding around him under the vehicle, struggling to see what he’s doing.

“COVID was difficult for everyone, but if there’s a positive, we’ve adapted some alternative delivery methods that we’ve incorporated into our learning today,” said Frank Rossi, CNC Trades Dean.

“Because trades are so heavily focused on hands-on training, we have to be innovative when it comes to things like this and many instructors stepped in and made the adjustments we needed in the workshops.”

Course content in trades programs continues to evolve as technology advances. CNC automotive students have four new hybrid cars in their workshop, given to college to learn how to diagnose and repair battery-powered vehicles. Electrical apprentices study solar power generation and carpentry students learn to build homes and structures that use high-efficiency materials and renewable energy systems.

Fueled by a housing shortage and a booming economy, construction trades are booming in north-central British Columbia and the demand for skilled workers continues to grow as skilled workers leave the market work. The college estimates that apprentices will fill 41% of jobs in British Columbia over the next decade and is working with the province to try to open its most popular programs to more students.

Aside from a two-week lull in August, classes are held year-round at the CNC. The new term for the carpentry, electrical, heavy mechanics and professional cooking programs began in mid-August, while all other programs begin classes on September 7.

COVID restrictions have forced the CNC to limit its class sizes starting in the spring of 2020 and with classes returning this fall, college capacity is now back to pre-pandemic levels. The carpentry and plumbing apprenticeship programs are nearly full, while the basic electrical and heavy CNC mechanic trades programs are oversubscribed and have long waiting lists. Such is the demand for trained workers that students in the electrical and heavy mechanical trades already have job offers from industry players and most will go on to apprenticeships once they have finished. their basic programs.

The BC government is reinstating a requirement that workers in 10 mandatory trades must soon be certified tradespersons or registered apprentices. Trades covered are electricians (industrial and construction), automotive service technicians, body/body repairers, heavy equipment technicians, gas fitters, steam fitters, pipe fitters, air conditioning, sheet metal workers and power line workers. The legislation, which will be phased in by 2025, is designed to make workplaces safer and increase the number of registered apprentices.

“It’s really going to put a lot of pressure on the school system because there’s going to be a higher demand for individuals to get their certifications,” Rossi said. “You will need to be a registered apprentice or leaning toward Red Seal certification. There may be questions from industry, but I think it’s a good system that will really increase the number of apprentices, and we need that because of the aging population.

Some workers, especially those in rural areas, learned their trade on the job and never had formal training, which will complicate how the new rules will affect some job sites.

“The (Industry Trades Authority) is trying to solve this particular problem where you have people who have worked in the field who are not certified and who are probably going to need a different path to get their certification and CNC and all the colleges will have a big role to play in this,” said CNC vice-president academic Chad Thompson.

Traditional four-year apprenticeship programs won’t work for some of these businesses and to encourage more employers to hire apprentices, the province’s 15 post-secondary trade schools are consulting with the ministry to prepare alternative delivery models. ‘learning.

The CNC continuously monitors labor market needs and is working on an industry initiative to develop a professional driver training program, which is dependent on government funding.

Civil Engineering was added as a new program added in 2020. The first cohort of Civil Engineering graduates graduated in June and 93% of first and second year students had jobs scheduled before the end of their courses .

“Our natural resources/forest technology program is always full, with very strong industry support. The forestry sector is changing, but we still need forestry technologists to support the forestry industry itself and of course the restoration/rehabilitation aspect of things, not only related to forestry, but mine site rehabilitation . You continue to do the work of a forester.

The college continues to promote its Career Discovery Program which allows high school students who have completed Grade 9 in English and Mathematics to earn credit for a 20-week, 300-hour program that allows them to experience four careers. different. Each year, CNC welcomes 64 Trades Discovery students to the Prince George campus and others attend the college’s satellite campuses in Burns Lake, Quesnel, Vanderhoof and Mackenzie. The CNC plans to soon add its technological programs to the choices offered to young students on its Discovery of trades list.

“We often hear that to get more people into the trades, we need to bring them in at a younger age,” Rossi said. “So we’re working with the school district to get students in grades 9, 10 and 11 exposed to different trades in hopes that they’ll enter apprenticeships and go on to Red Seal in the future.

“There is a long waiting list to enter Trades Discovery because we are limited in the number of places we can get. We try to look at underrepresented groups and one of the cohorts last year was a cohort of aboriginal women and it was a very successful program.

Since 2000, the CNC has offered dual credit programs to Grade 11 and 12 students attending the Technical Career Center. When these students graduate from high school, they have already completed the first level of an apprenticeship program. Some CTC students take their classes with college students and others stay with their high school peers in classes of 16 students. Once they have completed the course and completed their hours of work, they are considered second year apprentices.

“It sort of demystifies college,” Thompson said. “Many of the students here are first-generation students and no one in the family may have had a post-secondary education and setting foot in college is a daunting experience. If they have that opportunity in high school, they see it’s a great place and it breaks the fear that some of them have and they feel at home.