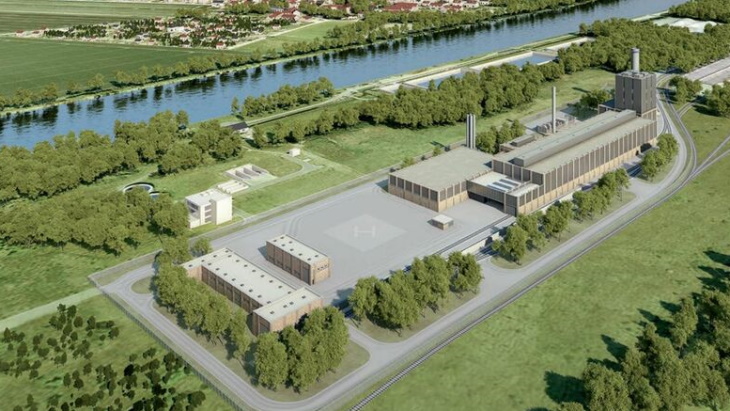 Contract for the waste reconditioning building at Konrad: Waste & Recycling

How the Konrad repository site could appear (Image: BGE)

BGE said Züblin was awarded the contract following a Europe-wide award procedure. He noted that four other companies had also met the eligibility criteria to participate in the complex construction project procedure.

In the building complex, delivered packages containing LLW/ILW waste will be radiologically checked, removed from trucks and wagons and prepared for underground transport through the Konrad 2 disposal shaft. The buffer hall, directly connected to the reloading hall , can accommodate short-term containers in the event of unplanned shutdowns of the shaft lifting system.

The construction of the seismic building will be supervised by different authorities. The Federal Office for the Safety of Nuclear Waste Management is responsible for monitoring under nuclear law.

Konrad – a former iron mine – will be Germany’s first repository for low and intermediate level waste. The mine closed for economic reasons in 1976 and investigations began the same year to determine if the mine was suitable for use as a depot for LLW/ILW.

In 2002, the Lower Saxony Ministry of the Environment issued a planning approval decision for the Konrad repository. Following multiple legal proceedings, this approval was confirmed by the Federal Administrative Court in 2007. A building permit was issued in January 2008.

In April 2017, BGE took over responsibility for operating the Asse II mine and the Konrad and Morsleben depots with the Federal Office for Radiation Protection.

The Konrad mine is being converted for use as a repository under the supervision of BGE. Both mine shafts are being renovated and equipped with the necessary underground infrastructure. This infrastructure includes, among other things, transport galleries and placement areas at a depth of approximately 850 meters. On the surface, construction work is underway on new buildings, including the reloading hall.

The conversion of Konrad Shaft 2 for container burial began in 2017 with the construction of the bottom of the shaft (the underground waste container transfer station). This construction phase is already at an advanced stage. Construction of the winding tower has also been contracted out and the tower is expected to be completed in 2026.

In the mine itself, the chambers for the start of the emplacement operations have been completely excavated. The mine openings for infrastructure, such as the workshop in the control area and the offset processing facility, are currently being dug simultaneously on six faces and are in an advanced stage of completion. The underground infrastructure (ventilation technology, water supply and discharge, traffic guidance, etc.) is in the final planning phase.

Konrad will initially take some 300,000 cubic meters of waste – 95% of the country’s waste volume, with 1% of the radioactivity. Currently, this waste is stored on the surface in interim storage facilities and at state collection points. DBE predicts that Konrad will eventually accommodate 650,000 cubic meters of waste from the operation and dismantling of nuclear power plants as well as industry, medicine and research. It was originally scheduled to be operational in 2014 with storage chambers on six levels from 800 to 1300 meters deep but was delayed.

As part of the German national program announced in August 2015, two sites are proposed for the final disposal of radioactive waste: Konrad for LLW/ILW waste and another site still undetermined for high-level waste. The program does not aim for an extension of the Konrad repository, so the second site will have to accommodate all the radioactive waste produced by the end of this year, when the last nuclear reactor in the country is due to close under the policy of the government’s nuclear exit. .