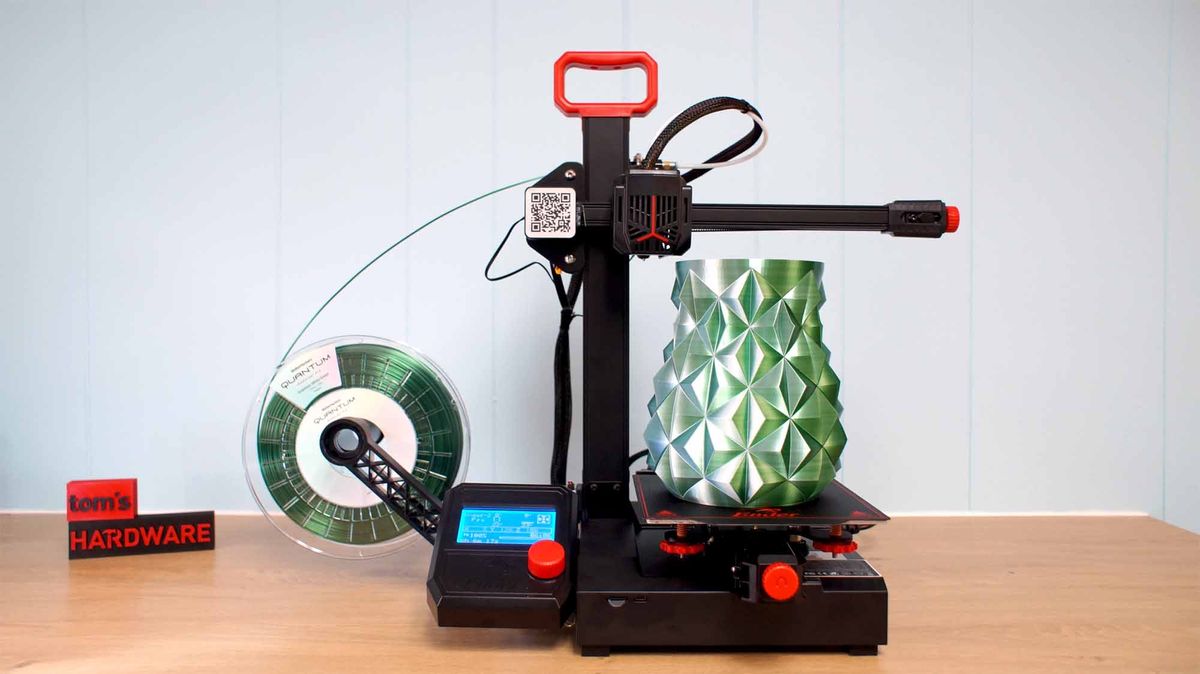 the Creality Ender 2 Pro fills a lot of niches. It’s a great starter printer for families looking to expand their STEM knowledge without breaking the bank. It is lightweight and topped with a handle allowing it to be easily moved from the table to the closet by weekend goers. And its small footprint is great for makers who need a decent second printer, but are short on space.

Retailing for $169 but often on sale for less, the Creality Ender 2 Pro is less than half the price of a Prusa MINI+which is on our list of best 3d printers because of its high quality and compact size. It also has about half the functionality, but still delivers quality prints.

The Ender 2 Pro comes from the same ecosystem as its big brother the Ender 3 Pro, which opens the door to many upgrades and modifications for future improvements. Better hotends, extruders, bowden tubes, nozzles, and even self-leveling modules are ready to be purchased from third-party vendors.

The small build volume – 165 x 165 x 180mm – can be a drag for some users. It can print a lot of toys and practical prints, but you won’t get far if your goal is to make costume parts and accessories. For just $70 more you can get an Ender 3 Pro which has a larger build volume with similar basic features.

The Ender 2 Pro comes with everything you need to set up your printer. You get tools to build and maintain the printer, side cutters, nozzle cleaner, spare nozzle, Bowden couplers and a microSD card with USB adapter. There is also a small sample of white PLA to print your first model. No scraper is provided as the surface of the soft bed could be damaged by one.

A short video on assembling the printer and making your first print is on the microSD card. There is also a PDF copy of the manual, a copy of Creality Slicer 4.8.0, and models in .gcode and .stl formats. One model is a bunny (tuzi) while the others are alternate grips (bashou) and a spaceship to mount on top of the Ender 2 Pro.

Design of the Creality Ender 2 Pro

The Ender 2 Pro has a compact cantilever design that balances the X gantry on a single Z axis. The entire printer can be picked up by the top mounted handle and is truly portable at 10 lbs. .

The printer has a plastic base but the frame is made from aluminum extrusions similar to those used on the larger Creality machines. The Z axis is held in place by four bolts and reinforced with a sturdy bracket to prevent wobbling. The back of the handle wraps around the top of the Z rod to protect it from impact. The power supply, motherboard and a handy tool drawer all fit under the base.

The Ender 2 Pro comes with belt tensioners for easy adjustments and a soft magnetic bed surface that makes removing prints a snap. It has upgraded quiet stepper drivers that make the machine quieter than other budget machines – all you’ll hear is the whirring of the fans.

The spool holder is side mounted for better balance and less vibration than the older top mounted Ender 2. It has the standard Creality hotend, extruder and Bowden tube design as seen on the Ender 3 Pro.

Its LED display is monochromatic with a select button – no fancy touchscreens here. The screen snaps onto the base without screws, so it can be removed for travel or storage.

The Ender 2 Pro is 90% pre-assembled and requires only 7 screws and bolts. I assembled this printer in about 15 minutes following the PDF instructions. If this is your first printer, I strongly recommend that you watch the operation video provided on the Micro SD card.

All screws and bolts are in labeled bags so you can grab the right part quickly. Wiring is also clearly labeled for easy mounting.

After assembling the printer, check that the three eccentric nuts on the printer are fully tightened to allow the X and Y carriages to move smoothly without wiggling back and forth. The eccentric nuts adjust the tension on the wheels and the Ender 2 Pro has two on the Y axis (on the right side of the printer) and one on the X axis (on the bottom of the carriage, the hotend is maintained). If there are any snags in the movement, give the nuts another quarter turn.

To learn more about eccentric nuts, check out this quick video from TH3D studios.

Then check that the belts are tight – not too tight, just tight enough to spring back when pressed. Use the belt tensioner knobs to make the necessary adjustments.

The buttons are much smaller than those of other Creality printers and require careful movement when making adjustments. The right rear button is in a tight spot that even my small hands struggled to get too. This is definitely not a printer that you level on the fly.

To level (or move) the print surface, first put the printer in the origin, then select “disable steppers” from the Motion menu. Slide a piece of plain paper between the nozzle and the bed. Push the hotend at each corner and adjust the knobs until the paper clings to the nozzle.

The Creality Ender 2 Pro has an option to adjust the Z-height while printing, called Babystep Z. This is found under Tune in the main menu and is only visible when the printer is printing. Negative numbers lower the nozzle, while positive numbers raise it.

The Creality Ender 2 Pro comes with a copy of Creality Slicer 4.8.0. You can also use Cura and PrusaSlicer, two popular programs available for free download.

PrusaSlicer has a profile for the Ender 2 Pro and it honestly works better than Creality’s or Cura’s programs for this machine.

Printing on the Creality Ender 2 Pro

For my first print, I loaded the supplied PLA sample and selected the pre-sliced ​​rabbit from the microSD card. It printed quickly with a 0.2 layer height and was a little stringy and rough on the ears – odd since Creality usually delivers high quality printing to wow new users. The filament looked a little suspicious, so I threw it away and loaded a new spool of Matterhackers Build Series Blue PLA. The bunny was still a little rough on the ears, but otherwise he looked fine.

For the second impression I ran the popular 3D bench via Creality Slicer using default settings with 0.2 layer height and 50mm speed. This produced a very good Benchy, the only flaw being a very visible Z-seam on the port side of the hull.

Then I ran the Benchy through PrusaSlicer, again using the default settings. This Benchy was even better, because PrusaSlicer hid the Z seam from me.

Below we see a sliced ​​model with Creality Slicer on the left and PrusaSlicer on the right, both printed in Matterhacker’s Build Series Blue PLA.

To see if the Ender 2 Pro can print more than tiny tugs, I cut out the popular crystal dragon by Cinderwing3D in ProtoPasta Blood of My Enemies using PrusaSlicer. This is an intricate, flexible print with dozens of contact points – good adhesion is an absolute must. The dragon didn’t fit and had to be scaled down to 80%, but still printed perfectly at a smaller size. Best of all, the flexible bed surface made it easy to release the dragon and it turned out perfect.

I was curious how far this printer could go and stretch Crystal Vase by Bugman140 to fill the bed of the Ender 2 Pro and then print it in MatterHacker’s White Green Quantum using vase mode. The resulting print measured almost 6.5 inches wide and 7 inches high. Not bad!

The Ender 2 Pro handled IC3D’s Raspberry Recycled PETG like a champ with this Easter egg #3 by Dave does stuff.

He also did a good job of printing a Fred the frog in MatterHacker’s Translucent Green TPU by Xx_SushiCat_xX. There were strings around the eyes and feet, but that’s to be expected with a Bowden printer and flexible filament.

Creality’s Ender 2 Pro is a great first printer for makers who want to try 3D printing without a huge financial or workspace commitment. It prints great right out of the box and its portability makes this machine a good choice for classrooms or a mobile STEM lab.

Its similarity to the Ender 3 line means you’ll find plenty of community support – and aftermarket parts. If something fails on your Ender 2 Pro, you can easily grab a part designed for an Ender 3 Pro.

If you like the compact size of the Creality Ender 2 Pro, but are looking for a better quality machine with auto bed leveling, a powerful extruder, hotend hotend and a color screen, then the Prusa Mini+ deserves your attention. If you want a larger print bed, the Ender 3 Pro is your driveway. And, if you just want a 3D printer under $200 with a bigger build volume, consider the Elegoo Neptune 2.

Up to 60% off handcrafted Apple accessories from Pad & Quill