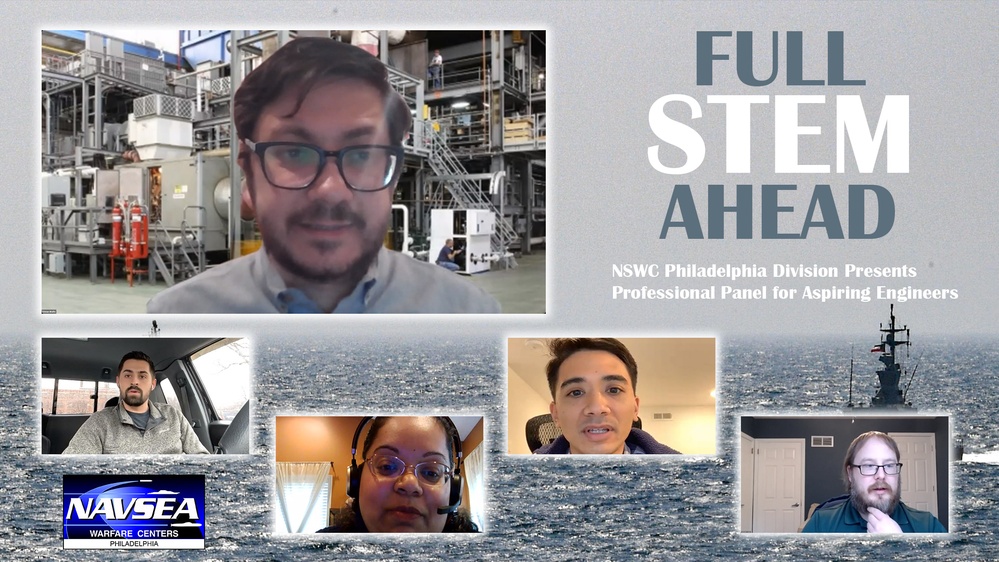 STEM plays a vital role in the vision of the NSWCPD: to shape the future of the Navy by continually expanding the Warfighter’s advantage. By having thoughtful conversations about STEM, NSWCPD increases the knowledge and skills of all of its engineers.

The panel was aimed at elementary and high school students in the Philadelphia area who have expressed an interest in the STEM field. Students from Harris, Darby Township, Sharon Hill, Delcroft, Delco Academy and Academy Park attended.

The panel discussed the similarities and differences of these engineering fields.

Amato said his job is to “keep the lights on. . . When you plug your phone into the wall, a lot happens to make it work. he said, adding that some functions include “electric power generation, which covers generation control distribution, protection. Some electrical engineers focus on generators to make sure they are working properly.

Although Berardino is also an electrical engineer, his duties are different from those of Amato. Instead, Berardino is busy creating digital models and simulations to uncover problems before the ship is built.

“Building facilities to test these things is expensive. This takes lots of time. So being able to do them digitally and exploring the options you have for system design is something that myself and a few other people have spent a lot of time focusing on,” Berardino said.

Computer scientists, however, are “sometimes known as software engineers or software developers. A computer scientist, in general, does much of the software development that controls the hardware. So a good example is if you have Apple iPhones, you will see continuous or periodic software updates. IT people are usually the ones who develop these software updates, test them [and] running them through their compatibility, a life cycle or a maturity cycle,” Amleshvarwala-Thaker said.

“One aspect I want to touch on is that a lot of things IT people do deal with cybersecurity. You may have heard that there are a lot of viruses and hackers out there,” Amleshvarwala-Thaker said, pointing out that these computer scientists prevent cyberattacks from adversaries.

“We manufacture any piece of machinery that rotates or moves, drives or converts mechanical power or hydraulic power. We just work on things that you can see, touch, hold and won’t zap you,” Taylor said detailing the role of a mechanical engineer.

Wolfe added that mechanical engineers are “also involved in things that don’t move. We analyze these internal stresses that occur in various types of things that are needed to support other things. . . If you look at your chair, someone has to design that chair so that it doesn’t collapse when you sit on it. They need to make sure they design it for different kinds of weight loads.

After providing the general descriptions of the engineering fields, the panelists provided more details on the full scope of their responsibilities and what they may encounter on a day-to-day basis.

For example, Amato had to figure out why a ship’s lights weren’t turning on. Fortunately, he and his team were able to turn on the lights, but they didn’t know why the lights went out.

“I watched everything. Everything seemed to be fine and they finally turned the lights back on. It’s not very comforting to think “well, I don’t know how it broke, but it’s better now”. We want to find the real problem,” he said. After two weeks of rigorous troubleshooting, Amato and his team were able to find a solution: two cords were swapped and caused power outages when specific conditions were met.

Situations like these are common in the field of engineering. Often, engineers cannot “search” for the answer to a problem. They must work with each other to find a solution.
Amleshvarwala-Thaker informed students that unfortunately they can work with peers who don’t value their opinion because of their identity.

“As a woman, you have to hold your own in terms of what you believe in and what you bring to the table. . . Over time you gain respect and people come to you for that information. You you are not known as the woman of the team, but you are known as a leader,” Amleshvarwala-Thaker said.

Bernardino also noted that technology in this area is improving incredibly quickly and by the time a ship is built it may already be using outdated hardware.

“Keeping up to date often involves reading outside of work and getting involved in professional associations; I am a member of the IEEE: Institute of Electrical and Electronics Engineers,” Berardino said, sharing what he does to stay current in his field of work.

NSWCPD Acting Technical Director Nigel Thijs concluded the event by briefly recapping each engineer’s contribution to the panel, as well as adding some of his personal experiences as a marine engineer.

“As engineers, we can work on anything, but people usually focus on an area of ​​interest like concept design or more tangible engineering areas like test and evaluation. … NSWCPD engineers work across the engineering spectrum. As a student, remember that engineering opens up options that you might not have thought of until you started to learn more about yourselves and the elements of STEM that match your dreams,” said Thijs.

The NSWCPD celebrated National Engineers Week with events throughout the week including; a special Black History Month presentation from the Joint Warfare Center by retired Capt. Sheila Jenkins and a brief by Jack Giessner, SES, Region III, Nuclear Regulatory Commission.

The NSWCPD employs approximately 2,800 civil engineers, scientists, technicians and support staff. The NSWCPD team performs research and development, test and evaluation, acquisition support, and in-service and logistics engineering for non-nuclear machinery, ship machinery systems, and equipment and materials related for Navy surface ships and submarines. The NSWCPD is also the organization responsible for cybersecurity for all ship systems.

The true meaning of Einstein’s most famous equation: E=mc²