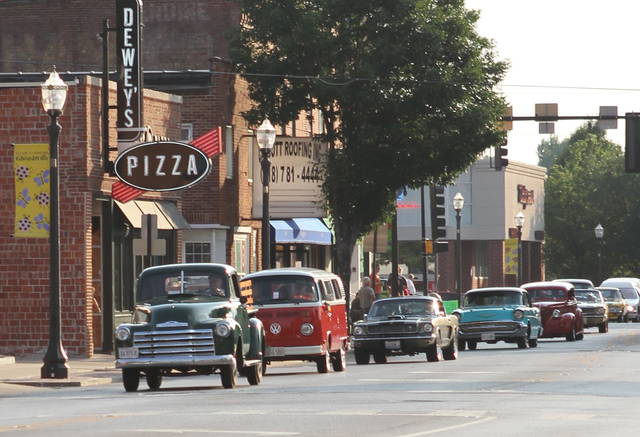 â€œThis is just one of the many benefits of Illinois Route 66 Scenic Byway members for the businesses and attractions that we offer,â€ said executive director Casey Wichmann. The plan is to launch another round of Byway Project funds in mid-September and the rewards will be handed out in late November, Wichmann said.

Over the past few months, the Illinois Route 66 Scenic Byway has received many exceptional applications and is announcing $ 5,000 to the following companies:

City Park in downtown Edwardsville was the perfect place to step back in time and gather on Route 66 for the 23rd annual Route 66 Festival on June 12. Visitors enjoyed great food, live music, classic car cruise through the city. , local artists, children’s activities and much more.

While 2021 brought the festival back, it also embodied the visual of the classic Route 66 vibe. Funds from the Byway Project were used to add photo opportunities, selfie stops and backdrop props with the energy of Route 66 that encouraged people to interact and have old-fashioned fun in a safe and non-contact way. The festival also added roadside signage and billboards.

The Skyview is one of four drive-ins that originally operated on Route 66 nationwide and the only one in Illinois. This year will be the 71st consecutive season in operation. The current custodians, the Pastrovich family, have been with the drive-in for five years, and the staff have combined 120 years with the company. The Skyview brings fans to the area and a one to three hour drive each weekend. It’s no surprise to find someone vacationing on Route 66 across the pond once a month or so. Showcasing both new and old movies, and with great food to boot, the Skyview is open from April 2 to October 16 of this year.

The Skyview seeks to modernize some of its grounds, while retaining the historic style and theme. The ticket office needs to be rebuilt and the landscaping needs to be renovated. Funds from the byway project are intended to help paint the screen. The paint is of a special type and costs about $ 5,000, not including labor. The family will paint the screen so that the expenses are covered. This is a much needed update on a historic endeavor that the region and 66 fans around the world appreciate.

The Elkhart Historic Route 66 mural commemorates the village’s long association with Route 66, historical figures and the beautiful Elkhart Hall. The Village of Elkhart Native Plant and Pollinator Habitat is located at the entrance to the village on Route 66 Scenic Byway in a location currently aimless and accessible to travelers on The Mother Road. It will be an active and attractive native plant and habitat for pollinators. The site has added value as a focal point as it is highly visible on Route 66, which is promoted as “Route 66 Monarch Flyway”. The habitat will be a pleasant and functional garden designed with the needs of pollinators and beneficial insects in mind and will be used to teach adults and children how to design, implement and maintain gardens of native plants and the insects that use them. . The public can walk in the garden on mulched paths.

Henry’s is a past, present and future Route 66 attraction for people of all ages. It celebrates Route 66 and the people along the highway with its emporium of highway and trucking memorabilia and a replica of a vintage gas station. This attraction offers everything about rabbits: Volkswagen subcompacts from the late 1970s to mid 1980s and the cute furry guy!

The secondary road project funds will be used to replace three of the four 4 ‘x 8’ exterior signs. Each sign is to be made of aluminum foil with an exterior sign overlay costing around $ 350 each.

The historic Atlanta Coal Mining Company will take visitors back to the late 1800s, when Atlanta was focused on getting a working coal mine. Visitors will see the original coal mine shaft sunk in 1879 through glass panels. There will be a lighting system and sound recording so visitors can see the mine shaft, about 150 feet deep, and hear the water still sinking to its bottom. On the exhibit wall there will be a monitor showing Go-Pro footage of a person rappelling down the mine, played on a loop. This will allow visitors to experience the sights and sounds if they were to descend to the bottom of the mine shaft.

Funds from the Byway Project will be used to create interpretive signs for the historic Atlanta Coal Mining Company. An illustrator will create images used on the panels as we do not have photographic documentation of the first coal mine. The illustrator will interpret the history of the coal mine, reference historical press articles and then draw images accordingly to maximize the visual effect of the exhibition. Children will be able to discover the history of the coal mine through the pictures, while adults will be able to read the history through the interpretive panels.

The Old Joliet Prison is an iconic structure located just off Route 66 in Joliet and is arguably one of the most recognizable penitentiaries in the world. Built in 1858, the prison is perhaps most famous for its role in the 1980 film, “The Blues Brothers”, in which John Belushi’s beloved “Joliet Jake” comes out to begin the film’s adventure. The prison is also gaining notoriety as the fictional “Fox River Penitentiary” from the television series “Prison Break”. Abandoned from 2002 to 2017, the site is now operated by the City of Joliet and the MusÃ©e historique de la region de Joliet, which offer a variety of tours and public programs. The site is extremely popular with international visitors traveling on Route 66.

Byway Project funds will be used to fund a series of informative and interpretive banners and signs across the site (see example included) directing guests to information regarding prison tours. Due to the size of the prison (16 acres inside the walls), concise and directional signage is essential to ensure a positive customer experience, which exceeds expectations. Since many visitors to Route 66 speak a primary language other than English, JAHM also wants to include multilingual functionality via QR codes in all new and existing signage on site.