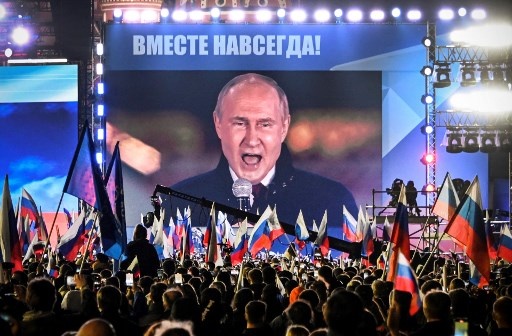 Eurotopics – Russia Appendices Ukrainian territory: what will be the fallout? – Kyiv Post

Russian President Vladimir Putin is seen on a screen in Red Square as he addresses a rally and concert marking the annexation of four regions of Ukraine occupied by Russian troops.

After the mock referendums in four Ukrainian territories occupied by Russian troops, Putin must sign the corresponding accession treaties this Friday. The formal accession of the four regions to the Russian Federation is to follow a few days later. For the European press, the annexation is contrary to international law and marks the beginning of a new worrying phase of the war.

Today, the European press discusses the ongoing Russian invasion of Ukraine. Here are some opinions drawn from a selection of European publications, presented by eurotopics.

“If his forces were defeated in these areas, he could no longer sell this as just a grouping. He would then have lost Russian territories. Another question will be to know if the jubilation aroused by the annexation will be able to stifle the anger of the Russians vis-a-vis the mobilization. … The so-called accession of new territories is Putin’s greatest trump card as far as the country’s mood is concerned. But the enthusiasm threatens to die out in the chaos of the mobilization. Perhaps that is why the Kremlin has been hesitant for so long to confirm Friday as the accession date. Not much seems to be going as planned for Putin at the moment. »

Current developments are paving the way for the use of nuclear weapons, La Stampa comments:

“From today, it will no longer be the war we have known until now. … All this because of a referendum that has no legal value due to the conditions in which it took place. unfolding and its arbitrary and one-sided character. But that does not change the fact that it triggers Putin’s nuclear blackmail: from now on, if you attack Donbass or the coastal strip under Russian control, it will be as if you had attacked Moscow or Saint -Petersburg, and we have the right to defend ourselves with nuclear weapons.”

Russia will now aim for the total destruction of Ukraine, Adevărul believes:

“Russia has the ability to target command and power centers in the capital Kyiv as well as other major cities with missiles. It can destroy power transmission nodes. It can burst dams and flood large parts of Ukraine. It can attack the rail network, bridges and major highways, all to paralyze the daily lives of tens of millions of Ukrainians. And he will continue this destruction of the country until the Ukrainian leadership raises the white flag and demands a cessation of hostilities.

“The Russian Federation as we knew it is entering a new phase of its existence, with a delegitimized border containing fragments that are not only not recognized de jure by any other country or international organization, but are also not controlled de facto by the central government. administration (unlike Crimea, for example). … The term “failed state” does not necessarily refer to an evil, brutal or poor state. Some of them get along pretty well. The crucial factor here is administrative decline and the inability to perform basic functions within its borders.

Seek a deal with China now

International pressure must be intensified to force Russia to come to the negotiating table, writes El Periodico de España:

“Russia’s moves to annex eastern Ukrainian territories using the same approach as in Crimea, and its provocative attempts to use energy to blackmail Europe frustrate the goal of bringing the conflicting parties at the negotiating table. US and EU efforts to supply Ukraine with war materials and stifle the Russian economy are paying off. … But they must be accompanied by diplomatic efforts to increase Moscow’s isolation. … An agreement with China would be crucial in this regard and should be pursued urgently.