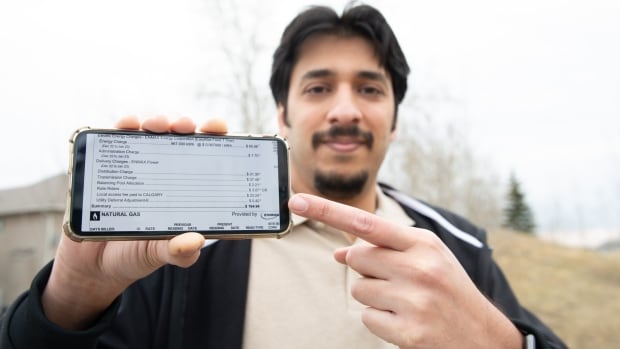 Electricity rates aren’t the only things that go up on electricity bills.

Analysis of the numbers by CBC Calgary found that the fees customers pay for gas and electricity infrastructure across the province have risen steadily over the past decade.

In particular, tariffs for access to the power grid and secondary power lines have more than doubled since 2010, when the province embarked on an effort to modernize and strengthen the system. This did not go unnoticed.

Customers are frustrated and ticked off by these add-ons – which appear with little explanation and can be more than the cost of energy used.

It was one of the most common complaints mentioned by the more than 800 people now registered with CBC Calgary’s texting community.

“There are all these additional fees – distribution fees, transmission fees… a whole bunch of things in there that I have no visibility of in terms of what they are. And I have no control over them. “said Shakeel Ahmed, who followed up on his text message with an interview.

A recent bill from Enmax was $165 for electricity. Only $65 of this amount was for energy use.

“My concern is what are the regulations? Can companies keep raising fees and there’s nothing I can do about it? I can control my consumption, yes. But really in this bill, consumption is the smallest element of that, and the same goes for my gas bills.”

So what’s on the bill?

Based on what we heard, our first step was to figure out how these fees are even calculated. They may look like fixed amounts on the invoice, but they are actually per day, per unit charges. Rates are buried in pdf documents deep within each company’s website.

We looked at those of Enmax and ATCOthe two companies that have a monopoly on delivering electricity and gas to Calgary homes (even if you buy electricity from another retailer).

Electricity charges are listed as Distribution, Transmission, and Rate Rider – basically, wires and the like in the city, high-power transmission equipment across the province, and special temporary charges that add up when businesses realize whether they are overestimated or underestimated. how much a capital construction would cost.

From what we’ve seen in Calgary’s bills, the amount people pay varies widely, as does the amount of electricity they use. But provincial agencies say the average household uses 600 kWh per month, which means less than $50 in charges.

Fees for natural gas are similar, covering the pipes to bring the gas across the province and to your home. ATCO lists them going back only to 2013, but they also nearly doubled.

What is driving the increase?

Have you ever noticed those massive steel towers and thickets of power lines crossing the QEII just north of Crossfield? It’s projects like this transmission line — massive investments in the network — that have driven up the costs.

This power line upgrade cost about $2 billion, which customers now pay in tariffs. And that’s only a part.

The Alberta Electric Systems Operator (AESO) has an overview of the system and helps coordinate and advocate for upgrades.

Spokesman Mike Deising says the companies have spent $13.5 billion over the past two decades on the provincial network alone. All of these costs come directly to customers through these fees.

“Because the system was just, frankly, getting old. It needed updating,” he said in an interview.

“And now it allows us to have a robust system that can withstand, as we’ve seen this year, three weeks of significant cold spells across the province. Or last year when the dome of heat came in and we’ve had two weeks of record-breaking temperatures – we haven’t had any power outages in our province because we have a robust transmission system.”

Other investments have been made in gas pipelines and electricity transmission networks within communities.

Who monitors to ensure that customers are not overcharged?

Electricity and heat are provided by a system that is only partially market-based in Alberta. You can choose which retail company you buy from, but you can’t choose who distributes it or how much you pay for the infrastructure. Distribution is where companies get a monopoly.

The Alberta Utilities Commission (AUC) is the regulator or judge of this system; its job is to ensure that the system is fair and that companies are only reimbursed for approved investment and maintenance costs.

Companies like Enmax, ATCO and AltaLink offer budgets and fees to hundreds of hearings per year. The commission makes a decision on what can go forward or should be reduced.

And to try to make sure the commission takes your pocket book into account, we have people like attorney Chris Hunt and attorney Jim Wachowich.

“We’re providing a bit of inflation control by working with other groups and stakeholders to make those cases,” said Hunt, who appears before the commission as an Alberta utility consumer advocate. By his calculations, he has saved the system approximately $1.78 billion since 2013.

“These are legitimate arguments about what level of IT security you need on the system? Can you upgrade your IT plan? How many computers are upgraded? That’s the minutia we go into,” did he declare.

“We often say, ‘Look closer at these costs,’ and utilities don’t like that,” said Wachowich, who works for the independent Consumers’ Coalition of Alberta and gets cost recovery through a decided process. by the committee. if he thinks his contribution is useful.

Historically, the industry has opted for slow, steady increases and avoided a rate shock, Wachowich said. But these latest increases have been too big to go unnoticed.

Now the system is worth tens of billions of dollars.

“Billions with a ‘B.’ And we’re now paying for it…I like the analogy of the frog in the pot of water. If you turn the heat up slowly, the frog won’t jump out and will eventually boil to death,” a- he declared. .

“But if he’s thrown into a boiling pot, he’ll try to go as fast as he can. What we’re getting now is a point where customers look at their bills and they say it’s a price shock .”

As for Ahmed, he now knows more about the origin of the charges. But he is still frustrated.

“It tells me that I can only control a tiny part of my electric and gas bill. Most of it I have no control over, whether I like it or not,” said- he said, after CBC News shared details of the case. to research.

He would like to see more transparency and accountability to the average consumer.

“If it can be explained in common terms,” ​​he said. “Of course, you can search and you might find some stuff. But if I don’t see it on my bill, I don’t understand it.

“So once a quarter, once a month, once a year – whatever the frequency – something that helps us understand, ‘Hey, here’s what you’re paying for and here’s how it’s allocated to us.’ “

Free Webinar: Are You Prepared If Rates Rise Again This Summer?

Join our host and a panel of local experts for an online webinar this Wednesday at 7 p.m.

Register here to join our Zoom webinar, or head to cbc.ca/utilities on Wednesday nights to catch it. In the meantime, read more about our in-depth community-led utility bill research here.