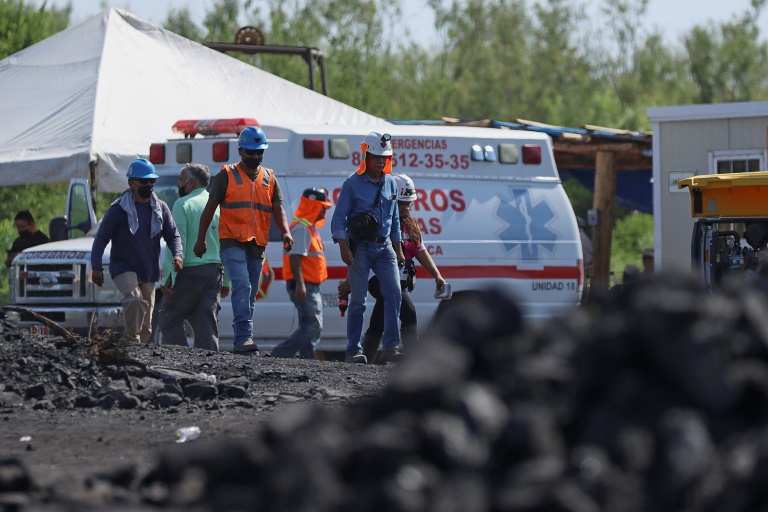 Families of trapped Mexican miners pray for a miracle

Rescuers work in a coal mine in Sabinas, in the Mexican state of Coahuila, after a collapse – Copyright AFP Jung Yeon-je

Dozens of rescuers fought Thursday to free 10 workers trapped in a flooded coal mine in northern Mexico, where desperate relatives have waited for news more than 24 hours after a cave-in.

As night fell again in the state of Coahuila, family members wept and comforted each other as the hope of finding survivors faded with each passing hour.

“What we want is for them to get the bodies back,” Angelica Montelongo said with a sad, tired look, before sparking new hope that her brother Jaime would be saved.

“But hey, God willing, right? You have to have faith that they are alive,” she said.

Soldiers, rescue workers and rescue dogs have been deployed to the Agujita mine in the municipality of Sabinas after the latest disaster to hit Mexico’s main coal-producing region.

“What I want with all my soul is for us to save the miners,” President Andres Manuel Lopez Obrador told reporters in Mexico City.

Five miners managed to escape alive after the rockslide on Wednesday and were taken to hospital, National Civil Defense Coordinator Laura Velazquez said, adding that two had been released.

“Time is crucial here,” she said.

Authorities said the mine’s three shafts had sunk 60 meters (200 feet) and floodwaters inside were 34 meters deep.

But the authorities are progressing and pumping the water “to rescue the miners as quickly as possible”, she added.

About 230 military and other government personnel were sent to the site, about 1,130 kilometers (700 miles) north of Mexico City, the Defense Ministry said.

Several pumps were used to fight the floods, but Lopez Obrador urged the national water agency to send more equipment.

“Unfortunately there is not much hope,” Jose Luis Amaya, whose cousin was among those trapped, told Milenio TV.

Experts and relatives have painted a picture of a precarious profession fraught with risk extracting coal from mines with lax safety standards.

Navarro said she still hoped to see him alive “because we trust in God.”

Roughly constructed mines like the one that collapsed lack concrete reinforcements to protect workers from a collapse, said engineering expert Guillermo Iglesias.

The miners are “digging a shaft two meters in circumference and continuing to dig until they reach a small layer of coal”, he told local radio.

The only thing supporting the surrounding earth is usually a large plastic tube through which workers enter, he added.

The Coahuila state government said miners were carrying out excavation work when they hit an adjacent area full of water, causing the shaft to collapse and flood.

Coahuila has experienced a series of fatal mining accidents over the years.

Last year, seven miners died while trapped in the area.

The worst accident was an explosion that killed 65 people at the Pasta de Conchos mine in 2006.

Only two bodies were saved after this tragedy and the families have repeatedly urged the Mexican authorities to recover them.