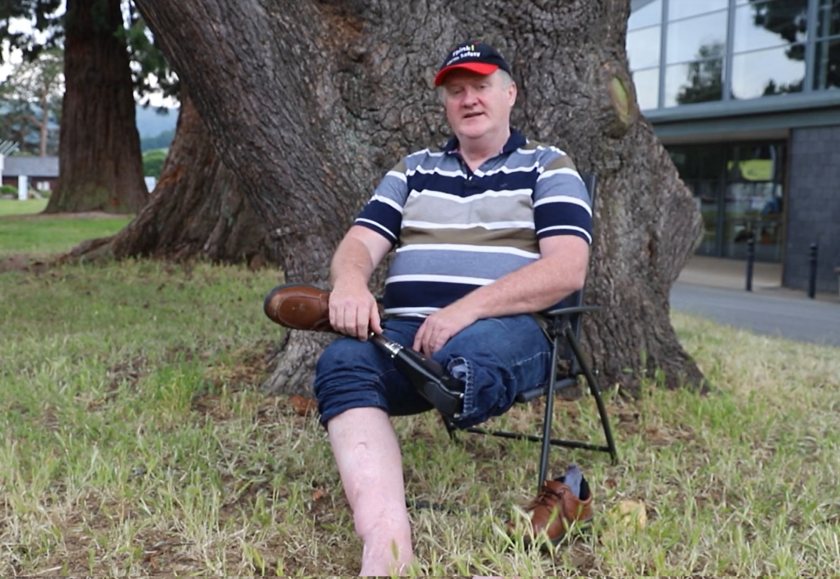 When Jean Gohery, an experienced nurse, was called outside by her distressed 10-year-old son, she found her husband Peter Gohery motionless on the floor of their farmyard in County Galway.

Lying by her tractor, she could see that one leg was completely severed and her other foot was nearly severed. Jean assumed that Peter was dead or close to him.

Fortunately for this Irish farming family, Peter survived, although his injuries on that fateful day in 2009 changed his life.

Every year, farmers lose their lives and limbs in accidents that could have been avoided. A high proportion involve machinery and tractors and of these many are connected to a PTO (Power Take-Off) or PTO drive shaft.

If this part of the tractor is always covered with properly designed and maintained guarding, the risk of injury or death can be greatly reduced.

Peter made a heartfelt appeal to visitors who recently attended his presentation on farm safety at the Farming Connect Innovation & Diversification Wales event in Llanelwedd.

“Stop, think and take the time to implement safe work practices on your farm at all times. It is better to lose a minute of your life than to lose your life in a minute.”

His honest presentation to a packed audience focused on the farm accident that changed not only his own life irrevocably, but also the lives of his wife and four children.

With a remarkably optimistic disposition despite his near-fatal accident, Peter spoke movingly of what it was like, at just 42, to spend months of his life in hospital, undergoing hours of intensive operations and physiotherapy. as he began his slow road to recovery. .

Nine months after the accident, he managed to get around in a wheelchair before finally being fitted with a prosthetic leg.

Today, Peter is able to walk, but suffers from pain when standing or walking for any length of time and has difficulty driving, navigating on slopes and on soft or uneven ground.

His ‘good’ leg is massively swollen and was only saved thanks to skin grafts by a brilliant medical team who transplanted muscle and tissue from his thigh to help reattach the foot.

That fateful fall morning of 2009, Peter had spent the day preparing the farm’s suckler calves for weaning. He wore his usual farm overalls and steel-toed safety boots – his sensible “good practice” routine when working with cattle.

However, upon returning home for lunch, his knee kept sticking out through a gaping hole in the waterproof part of the suit, so he decided to find some scissors and cut the offending fabric.

He didn’t notice the long, torn piece of fabric still hanging down. Later that evening, Peter decided to check the farm feeder in anticipation of the upcoming season.

“I started it but heard a knock at the rear of the machine so decided to let the tractor idle – of course I should have practiced a ‘safety stop’ ‘ and shut off the engine – but I just quickly jumped in to investigate what was causing the problem.

“I could see two hydraulic lines that appeared to be in reverse order, so I just grabbed them with one hand and swapped them easily.”

But as Peter backed up, he discovered that the long strip of fabric still hanging from his suit had become entangled in the driveshaft, which had no guard or cover.

The fabric quickly wrapped around the rod and Peter’s leg was completely severed. As the other leg was also caught in the torque, he was thrown to the ground, his right arm smashing into the tractor, shattering two other bones.

“It wasn’t until I was lying on the ground and trying to get away from the machine that I realized my arm was broken, but I saw that I had lost my leg and my other foot was hanging down.”

Jean rushed to Peter’s aid and her nursing training saved his life as she applied makeshift tourniquets to stem the bleeding, as they waited for the air ambulance to take him away at University Hospital Dublin.

Peter appreciates that he is lucky to be alive and thankfully he and his son, who is now 23, are both mentally positive all these years later.

After the accident, neighbours, friends and family stepped in to help with the day-to-day running of the farm, but realizing he could never return to his old way of life, he sold the cattle and rented them out. farming lands.

With his wife and young family to live on, Peter decided to return to university where he completed a BSc with a primary focus on health and safety.

For over a decade he has dedicated his life to being an agricultural safety adviser, lecturing and lecturing on behavior based safety to farmers across the UK and USA.

“It’s ironic to think you can get a PTO guard fitted for around £120, but a prosthesis, which usually needs to be replaced every few years, costs upwards of £40,000.

“Don’t let an accident like mine happen to you or any member of your family. Learn about the safety procedures you need to put in place to make your farm a safe place to work.

Bonfiglioli provides a 24/7, no downtime solution for Plucks Engineering