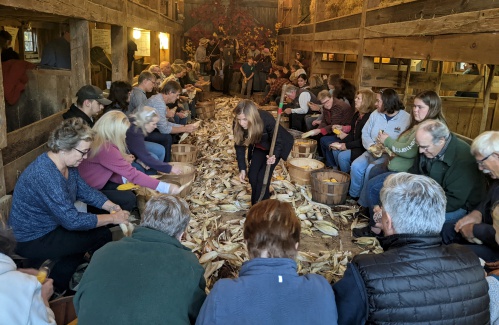 From the farm: A blown engine with cattle on board

First there was the explosion, then husband Bruce shouted, “Stop!” With nowhere to stop as smoke billowed from the Ford F450 pickup and billowed behind the stock trailer, I pulled over on the freeway, turned off the engine, tugged on the hood and grabbed the fire extinguisher. Bruce jumped out of the cabin to check under the hood.

Earlier in the day, we picked up three head of cattle in Freeport, Maine. The salty, damp air filled my lungs as we set up the trailer to load three big Scottish Highlanders. Cattle owner Mary, who lives next door to the Wolf Neck Agriculture and Environmental Center, managed to coax the bull into the trailer, but the two cows were more reluctant to leave their pasture. I don’t blame them; the Wolf Neck Peninsula offers spectacular farmland and ocean views.

Using a halter and lead rope, we convinced the young cow named MacKenzie to get on the trailer, but the older cow, Helen of Troy, didn’t want to join her friends. With Bruce pulling a rope around his horns, helper Grace and I pushing, and Mary holding the trailer door open, we finally convinced Helen to lift her 1,200 pounds into the trailer.

Next, we sought out Wolf Neck’s Center snack bar for lunch. We drove the rig, cattle and all, to campus, where we met Thomas Prohl, who manages the organic dairy on the property. Her team occasionally helps Mary with her Highlanders. We talked a bit of “cow” with Tom, then we went home.

It was in Northwood, on the only eastbound stretch of the two-lane highway, where the truck’s engine exploded. The truck was parked on the road; fortunately, traffic could use the passing lane to make their way. What would we have done if it had caught fire? If I wanted to save the cows, I would have to unleash them… on route 4… during rush hour. It didn’t come to that, but I had to figure out how to get the rig home. Should we unhook the trailer and take another truck to transport the cows? Could this be possible with the traffic flowing in the other lanes?

The magic of the Internet saved the day. After calling 911, I found the right towing service near Concord. The dispatcher said he would send a rig that could tow the truck with the loaded trailer attached. When he arrived 45 minutes later, David, the driver, attached his lift to our broken down truck, disconnected the driveshaft from our truck, and then, with truck and trailer with cattle, we were on the the way back.

Half an hour later, David dropped off the loaded trailer at the farm, and Bruce used our tractor to back the trailer up to the paddock and unload the cattle. David then left the truck at Glen’s Truck Service in Belmont.

The cattle settled in, but we needed a break from this drama, so the next day I went to a corn hustle and counter dance at Sanborn Mill Farm. The farm’s mission to teach traditional crafts and farming methods was fulfilled that night. Rather than using machinery to do the work, the farm hosted over 100 neighbors and friends in the barn to grab the cobs from the pile and shell them.

After shelling, the bare cobs were carried outside in baskets and thrown into the corn crèche, a ventilated building with a roof, to keep out rain and allow air circulation for further drying. Eventually, the corn can be fed whole to the pigs and ground to feed the chickens on the farm.

Then, on the program, a table loaded with delicious dishes, then a counter-dance. With the sweet smell of hay bales stacked in the attics above, Peter Winne, Lars Prillaman and their friends filled the barn with the singsong sound of country music. The couples faced each other down the narrow aisle of the barn as Peter called down the steps. After a quick glass of chocolate-raspberry port, I tossed the image of a broken truck aside as I did so-do with my partner down the barn driveway. Many thanks to Paula and Colin Cabot and Steve and Betty Fifield for creating this joyful event.

Sanborn Mills corn is in the nursery, my new cattle are in their pasture and the truck is at the store, so now I can focus on the pumpkins! We have a bunch of them for visitors to mash for my cattle. We provide you with the mallet to split the pumpkins and squash into manageable pieces for the herd. Stop by Miles Smith Farm Monday through Saturday from 10 a.m. to 5 p.m. for some low-tech fun.

Carole Soule is co-owner of Miles Smith Farm (milessmithfarm.com), in Loudon, NH, where she raises and sells beef, pork, lamb, eggs and other local produce. She can be reached at [email protected]