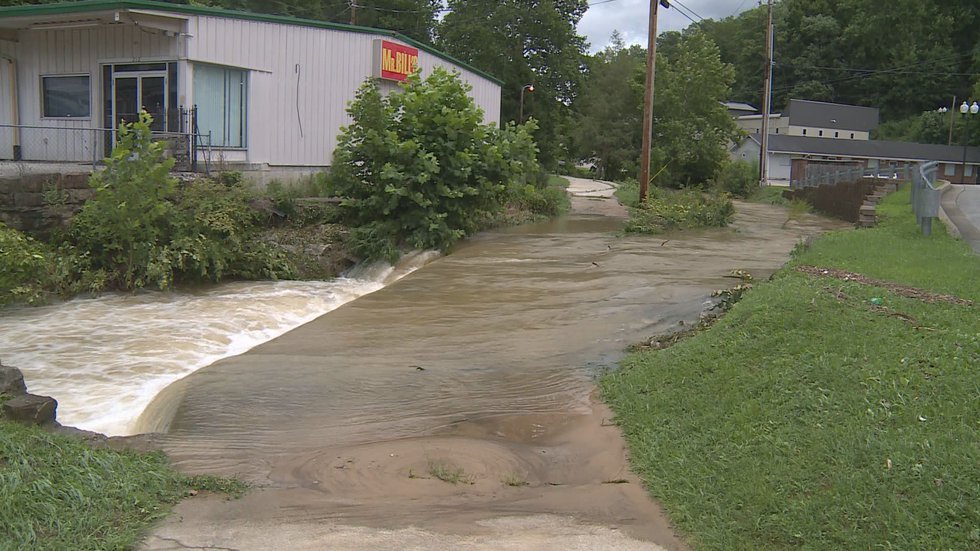 Brody Keck is the deputy manager and says the severe flash flooding they saw on Saturday morning has some citizens fearing the worst, with the devastation of the past week still fresh in their minds.

“It seems like it’s all happening at once,” said Keck, who took control of Saturday’s situation because their manager had left to help with search and rescue efforts in Letcher County.

Keck says hundreds of people were without power due to the storms. However, he says all of these issues were resolved during the day.

Keck added that two emergency calls came in. One was on East Water Street in McKee around 9 a.m. Saturday, but residents were finally able to get to safety. The other was for ATV riders who got stuck on the trails overnight.

“They came in last night before the rain hit and they had some kind of mechanical failure or something happened to where they were supposed to stay,” Keck said.

“This whole area around here was just a lake,” said Ron Maharry, who has served as the church’s pastor since 2001.

The church sits at the confluence of two streams and several inches of water have entered its basement. Even still, Maharry calls it just a minor inconvenience compared to what other counties in Kentucky have faced.

“We realized it wasn’t going to get any worse, we were blessed, and of course our thoughts and concerns were always with our neighbors in eastern Kentucky,” Maharry said.

While the high waters have receded for now, both Maharry and Keck are concerned about the impact more rainfall may have on Jackson County waterways.

“It wouldn’t surprise me if the next heavy rain we got, the water came back into our basement,” Maharry said. “There’s just nowhere to go.”

Keck says some county residents are used to flash flooding, so they stay aware of their surroundings. But they’re just praying for the seemingly incessant rain to leave this ravaged region.

“We need dry days, that’s what we need,” Maharry said.

Maharry says that while some Bible study classes may be canceled, they are still holding their Sunday services despite the setback.

Gotham Garage Vs Gas Monkey Polaris Slingshot Build Off: Who Did It Better