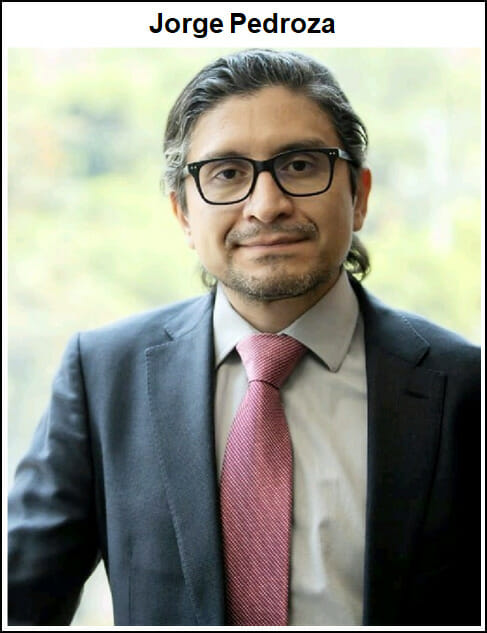 Mexico’s biggest growth opportunities include “natural gas and natural gas processing at the top of the list, including storage and completion of the supply chain, such as the development of LNG processing centers in the ports,” said Jorge Pedroza, director of energy at PwC Mexico. GPI of Mexico from NGI.

“There is a window of opportunity that won’t last very long and now is the time to make those investments that have been delayed by some economic hurdles,” he said.

A seasoned professional in the Mexican energy industry, Pedroza has served as Director of the Energy Sector in Mexico for PwC since 2004. Pedroza serves as Director of Risk and Regulatory Practice at PwC Mexico and its list of clients include the energy, mining and infrastructure sectors. . He also advises companies on regulatory compliance, risk administration, processes, business practices and digital transformation.

Pedroza holds a master’s degree from the Tecnológico de Monterrey in energy administration, energy management and systems, and holds two bachelor’s degrees from the Universidad Autónoma de Mexico (UNAM), including one in energy law. energy.

NGI: What are your thoughts on the ongoing disputes under the United States-Mexico-Canada Agreement, or USMCA, and what do you expect from the consultations in the coming weeks?

Pedroza: Given that the issue is strictly political, it is difficult to be certain about the direction that the consultations will take. The only thing that is probably certain is that the potential sanctions established under the agreement would have both an impact on the economy, as well as an impact on the stability of the business environment.

Mexico has a lot going for it, such as proximity to the world’s largest economy, installed infrastructure, fiscal discipline and a stable exchange rate. However, three situations have affected investments in Mexico, namely citizen security, uncertainty in the business environment and lack of energy security. This includes a lack of investment in gas transmission and storage infrastructure, as well as a lack of investment in power transmission lines.

Following the consultation process, companies must now conduct risk assessment exercises that include a scenario in which their supply chains could be affected or their ability to import or export products could be affected, which indicates that potential sanctions in the USMCA disputes are unlikely to have a favorable outcome for Mexico.

NGI: Do you think the United States, Canada and Mexico will resolve their differences in USMCA consultations before being sent to a panel?

Pedroza: It’s the best scenario for all parties, and for that reason, it’s probably the likely scenario. However, the possibility of disputes moving to the panel stage is always possible and cannot be ruled out.

NGI: Recently, the Comisión Federal de Electricidad (CFE) and Petróleos Mexicanos (Pemex) have awarded contracts to private energy companies, such as New Fortress Energy Inc. and TC Energy Corp., for example. Do you think it’s a good sign that public energy companies are now more willing to work and partner with private companies?

Pedroza: It is always a good sign that private companies are identified and chosen to be business partners with public energy companies.

However, the avenue for doing business in this way is likely limited, given that the country maintains discipline in the free market and therefore the state cannot guarantee certainty in all investment decisions made by companies. private. The model continues to be that national investment plans and programs define the path where financing is needed, such as energy infrastructure, the development of industrial poles and the development of new industries in Mexico where there will be high demand to medium and long term, such as the manufacture of car batteries, for example.

NGI: With regard to your clients in the energy sector: what are their opinions on the current state of the Mexican energy industry? Are they optimistic or pessimistic?

Pedroza: Companies have always been cautious with the understanding that political issues are an external factor on which they cannot really position themselves. However, companies must be prepared and assess the risks in the event of sudden changes in decisions that impact the whole country.

Ultimately, it is this mood that is taken into account when making investment decisions for the projects that companies wish to carry out, since every decision carries a risk and this risk must be taken into account. and measured against the business environment and political context within the country.

NGI: In your opinion, what are the most pressing challenges facing the Mexican energy industry today?

Pedroza: There is a lack of a comprehensive vision of the balance of energy sources that the country needs, for example identifying what Mexico needs in terms of installed capacity, not only for transport and storage, but also for processing upstream of natural gas where Mexico could recover some of the natural gas it currently burns. Currently, this creates work limitations in several regions of the country and the lack of energy is a decisive factor for many new companies – for example those considering proximity opportunities – who wish to establish themselves in Mexico.

The vision should include the identification of projects that meet projected demand for the next 30 years and that require multiple sources of energy, not just one primary source. This vision must take advantage of the great potential of solar energy, which goes beyond solar panels, and includes solar thermal collectors and farms that can substitute the consumption of natural gas for the processes required in certain industries.

Moreover, such a vision would not simply list projects, but implement them. In this sense, there would be a great opportunity to attract private capital to be able to realize projects that generate viable returns on investment and create cost-benefit opportunities that, instead of using the most accessible infrastructure available , would allow them to be substituted and replaced.

NGI: Where do you currently see the best growth opportunities in the energy sector in Mexico?

Pedroza: Undoubtedly, natural gas and natural gas processing are at the top of the list, including storage and complementing the supply chain, such as the development of LNG processing centers in export ports. There is a window of opportunity that will not last very long and now is the time to make those investments that have been delayed by certain economic barriers. Given that natural gas has always been accessible, it seems unlikely that prices will go back below $5/MMbtu.

With the recent focus on climate change impacts, natural gas is the hydrocarbon that can help society reduce carbon dioxide emissions, although green hydrogen has recently attracted considerable interest as a carrier. of energy in countries like Germany, Australia, Japan, and the United States The governments of these countries are doing a lot to create public policies and, for this reason, investments in green hydrogen could soon [potentially] compete with natural gas.

On the electricity side, there is a great opportunity to invest in electricity transmission. While this is indeed a government-only activity, transport projects could be awarded to private companies through competitive bidding. The lack of investment in transmission projects generates higher costs for end users, both in terms of tariffs and the constraints they create for companies looking to expand their activities.

NGI: What do you expect from the Mexican energy industry in the last 18 months of the current administration?

Pedroza: There will likely still be a prospect of uncertainty, not only in the current environment, but also likely with respect to plans to expand Mexico’s energy balance which, given the lack of clarity, does not see the flow of d investments that the country currently needs.