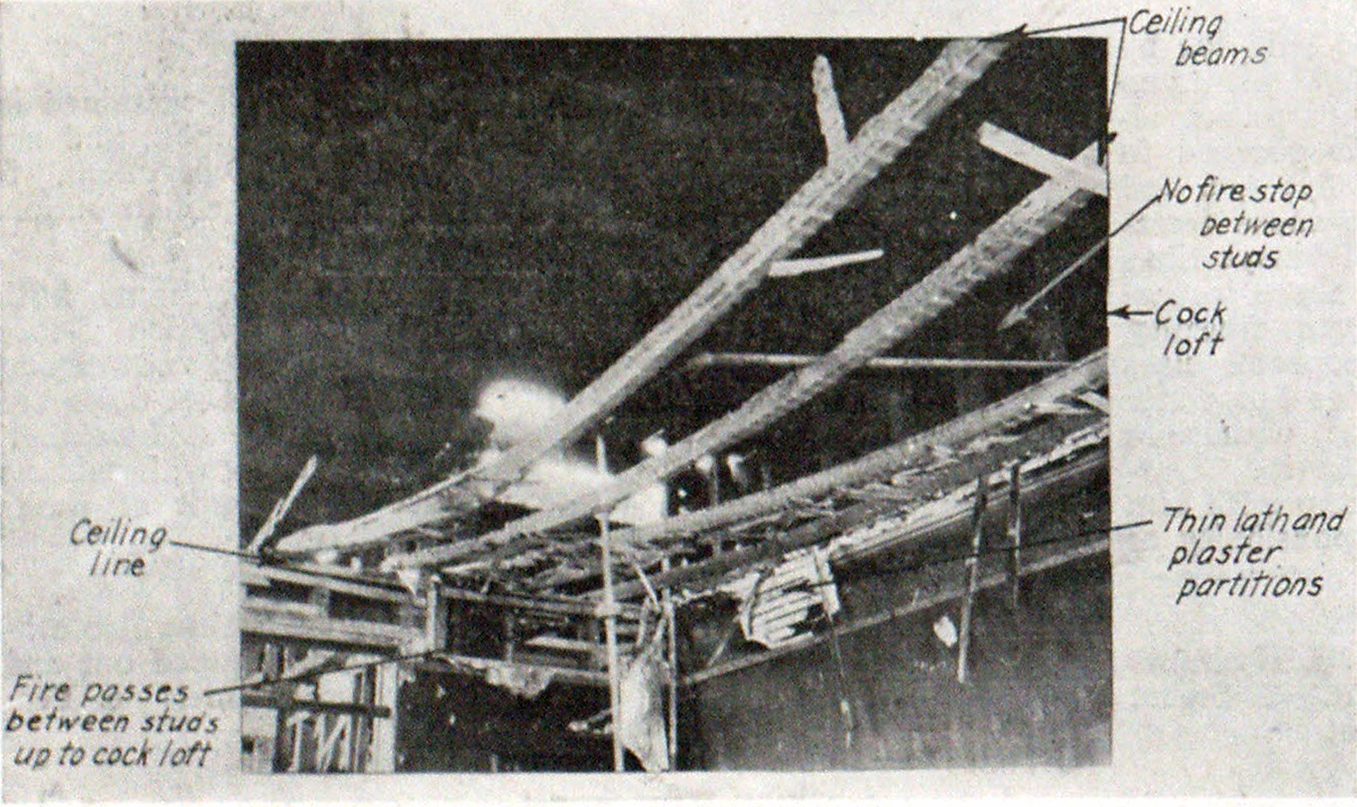 These shafts are wooden from the foundation wall to the roof, and come in two styles, one of which is completely enclosed by adjacent buildings, and centrally located on the lot line of the two buildings, fig. 132 and 133. They vary in shape and range from 12 to 60 square feet, from two to five windows open directly onto the well, from the bedrooms, toilets or kitchens; the other style, although located between the buildings, is open at one end, onto the courtyard, and generally two windows face the well of each building; these two styles are open to the sky.

Being located between buildings and having so many non-fireproof windows, it is possible for a tire to spread not only from floor to floor, but to several rooms on each floor at the same time, and burn up to moldings on either side of the roof, eventually making its way into the rooster loft.

In the event of a fire in or around a well, take a quick look at all the rooms leading to the well, as you will sometimes find clotheslines hanging in the well and almost always clothes hanging from the windows. especially in the bedrooms.

This well generally extends from the first floor to the suspended ceiling on the top floor, and is in lath and plaster; they vary in size, but are typically three to six square feet in area.

This is the well where many construction defects will be found, because due to their small size many were found without plaster applied to the batten, which in case of fire will tend to cause combustion. fast (Fig. 134).

These wells are usually found at the top of the stairs just behind the toilets, inside the apartments, and in the event of a fire in the well, extreme caution should be used, as the fire can communicate with the attic, and also in in the event of a fire in the hallway, and the bathroom door being left open, it would spread to the well; the fire can also descend and find additional fuel in the garbage or paper line at the bottom of the well, allowing the fire to come out under you, if you were on the upper floors.

Of construction in slats and plaster, some are covered with paneling. The partition usually stops at the suspended ceiling on the top floor, making the rooster loft the multiplying space for the fire.

An open well will quickly communicate the fire to the upper parts of the building, and if the apartment doors are open, to the apartments, also if the _____ar door is open, falling sparks would cause the fire to descend into the cellar.

In the event of a fire in the shaft, open the partitions, make sure that the rope has not carried the fire, examine the sliding track on which the dummy moves, and the cleats holding the dummy and weights, at the top of the sheath; examine all the apartments and the cellar to see that the fire has not spread, and don’t forget the attic space above. Do not direct the jet up the tree carelessly against falling dummies or weights.

In the event of a fire in a duct with a coating on the top, have this coating removed as quickly as possible. The greatest danger with all wells is when there is a connection between them and the cellar or rooster barn. This is especially true of the dumbwaiter shaft. The number, size and construction of the window or other openings in the well should be taken into consideration, as they can be the way to extend the tire to other parts of the building.

The rooster’s loft is the space left between the suspended ceiling on the top floor and the underside of the roof beams (Fig. 135); they vary in height, but are generally about two feet in the back, and a little more in the front; the facade in many cases depends on the style of the roof cornice, some are very simple, and others are ornamental; in the latter the space will go from six inches to a foot higher than in the plains; where this space is not cut? at dividing walls, space can continue through a whole row of buildings. When the partition walls are built up to roof level, the rooster loft does not have the dangerous condition that prevails when it only reaches the suspended ceiling. In the latter case, we only have the loft on each one to face.

Having a large uninterrupted area for the fire to pass through (Fig. 136) and everything in the construction being combustible, the fire will build up against the underside of the roof panels and rapidly spread throughout the space, and where the area is not broken by fire retardant at the dividing walls, will spread to adjacent buildings. The rooster loft is especially dangerous when the interior partitions of the shaft end at the suspended ceiling, as this is where the fire will spread.

Roosters should be ventilated promptly in the event of a fire in a building, even if the fire has not spread there, and they should be examined before leaving the premises.

Fires of this character are problematic and require judgment and speed, and experience of previous fires has taught us how best to put them out, but before we discuss how we are going to put them out, we will consider: in the loft and what happens after they do it; this will benefit you and will probably prevent the spread of the fire, or if this extension was before you arrived, show what you can expect.

How do fires enter the Cock Loft?

By burning through the slatted and plastered ceilings, partitions or sidewalls of a fire on the lower floors.

By burning through a well or pipe recess, up and down. Intentionally; these, however, are very rare.

By spontaneous combustion from paint materials or other fuels stored in the faucet attic space.

What happens after the fire enters the loft

It has a large, uninterrupted area to walk through and, if not quickly controlled, will not only spread throughout the attic of the burning building, but it is possible that it will spread through an entire row of buildings. . It is also possible for the fire to fall into shafts or recesses in the walls or partitions. Very often rooster barns are used as a storage place for all kinds of discarded household items, each of which will burn and tend to facilitate the spread of fire. The rooster lofts being low in height, heat builds up and the fire spreads quickly.

The fact that smoke is seen coming from several ledges in a row of buildings does not indicate that they are all on fire, but it does indicate that there is either an absence of firebreaks or barriers. worthless fire, and this is a sign for you to be careful and take the necessary precautions to stop the possible spread of fire. Our goal is to prevent the fire from spreading if we find that the fire is burning in one or more buildings; we cannot prevent it, as it has already happened, but we can control its spread; and in achieving this goal, it may sometimes become necessary to neglect the burning building and turn our attention to neighboring buildings; this will be shown in handling an expanded attic fire, which will be discussed later.