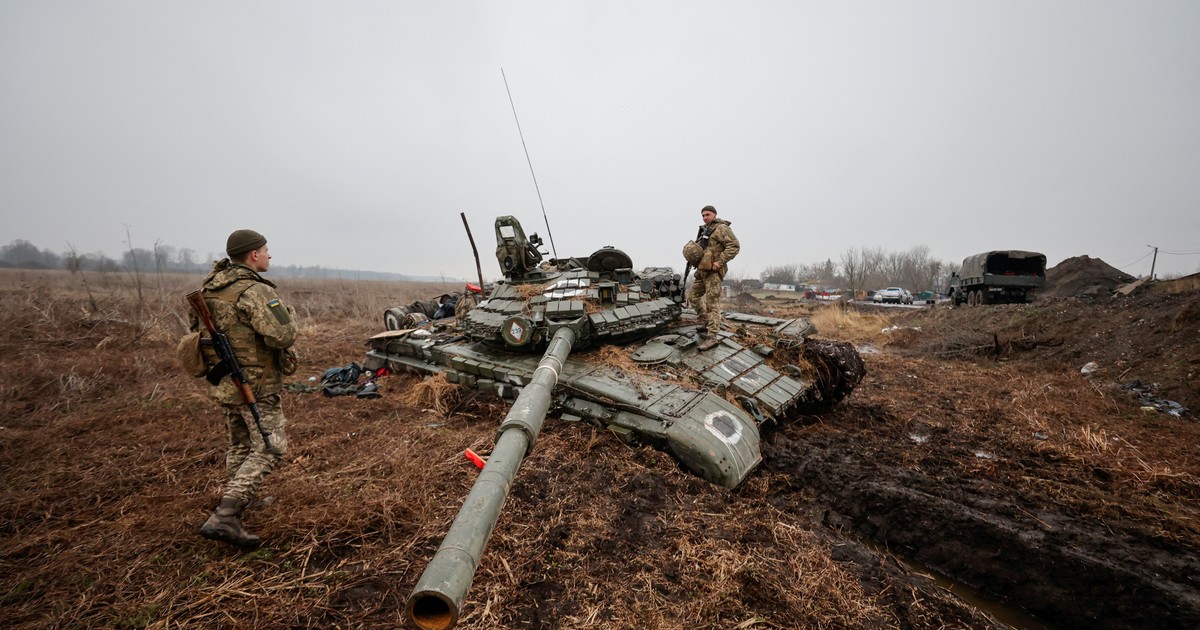 Whoever gets on top of a tank ends up dying. The sentence was read several times by the envoy of Bugle in the social networks of Ukrainian fighters. The locals threw a party with the Russian war tanks. They were systematically liquidated.

“Throw and run, as simple as that,” they said. “Aim with sight of the Saab-made missile from anywhere, from behind a wall or a tree, and boom,” they explained in their YouTube procedure manuals.

For Ukrainians, destroying a Russian war tank has almost become a sport or a game (A viral goes around with Super Mario Bros music in which one of these vehicles is seen flying through the air and those who hit the target celebrate). But this is no joke.

After 40 days of belligerence, it has been laid bare that the Kremlin’s military supremacy – at least part of it, that which was to advance by land – was far from what it had promised until then.

A month ago, when the invasion started, a photo scared the world. It was a satellite image of a tank convoy over 60 kilometers long, apparently heading slowly but surely towards kyiv.

Analysts were tired of saying that was the end of it. That the Russians would enter the capital with a cannonade and that they would finally raise their flag in the Plaza de la Independencia. To a large extent, this would be possible thanks to the all-terrain power of the old T-72, T-80 or T-90, stainless glories of the Second World War, where the greatest battle in history took place with machines of this type. .

The antecedents of 20th century conflict described in the tactics books indicate that behind the sweeping tanks the infantry had to appear to complete the conquest. But none of this happened, quite the contrary.

The Russians are now moving away from the capital. Reports from the past few hours show a notable setback, even beyond Chernobyl. They withdrew to the occupied areas in the east of the country, when not to Belarus where they would study a new invasion strategy.

In their retreat, evidence remains on the ground: photos of tanks destroyed they abound in the Telegram networks which record the results of each confrontation daily throughout the country: from kyiv to Odessa, via Kharviv or Jarson.

A Russian tank attacked the Ukrainian town of Dmytrivka, west of kyiv, on Saturday. Photo: AFP

Thus, the members of the Ukrainian resistance constitute an increasingly large catalog of objects cremated, destroyed, piled up like scrap metal, buried in mud, in ditches or directly transformed into pieces of twisted iron.

At his side, on many of these images, we can guess the lifeless bodies of the bands of soldiers who entered inside. They couldn’t do anything against the game of traps and ambushes that local fighters set for them. Versatile, armed with modern tools, they were implacable with the enemy, at least in this first stage.

War tanks are a British invention. They began to be used from 1916, but became a symbol of true military power during World War II.

It was his peak. Designed as implacable armored machines, bulletproof and suitable for any type of terrain, they became useful in the conflicts of the Middle East at the end of the 20th century. But with the advent of technology and the possibilities of remote attack, they have become quasi-static machines, very slow and vulnerable, even more so in urban environments.

Ukrainian civilians who trained with weapons and joined the fierce resistance against Russian troops. Photo: Reuters

Turkish Bayraktar drones have become a nightmare for Russian tank convoys in this war. On the outskirts of kyiv, during their crossings to the villages, they prowled them like a fly. A fatal hum. They checked their route and the clumsy vehicles didn’t have much to do. They destroyed them in such a way that the actions of these drones ended up creating a real fascination with the public.

Ukrainians have an application similar to the Mi Argentina application, which collects all the information on each citizen: social security, Covid vaccines, driving record, medical history.

The action of the Turkish drones against the tanks was of such importance that a specific video game designed by the State appeared in this same application in mid-March.

The Ukraine app where a video game to destroy Russian troops has gone viral.

It consists of a parade through a forest of tanks bearing the letter Z (Russian army identifier) ​​and seen from the sky by the watchful eye of a Turkish drone. The player, who operates the flying ship, positions himself with the reticle and liquids. As if it were real. Every Ukrainian has his own record. “That’s my best mark,” said Olekssi, a student who taught the game at Bugle.

But this fury of young people, translated into reality, only explains what is really happening.

During the first two weeks of fighting, the Russians had lost over 300 tankettes. So many victims respond to various factors. Those already said, its old age in the face of remote operating technology.

And one more: the lack of expertise on the part of soldiers who have not been trained to operate them. Turkish drones, Javelin missiles (which the West sent in torrents), Saab missiles and the audacity of the Ukrainian resistance, as versatile on the ground as computerized in the shadows, decreed that these beasts, once machines of death, destruction and metal-mechanical power They are no longer of much use.

TOPICS THAT APPEAR IN THIS NOTE