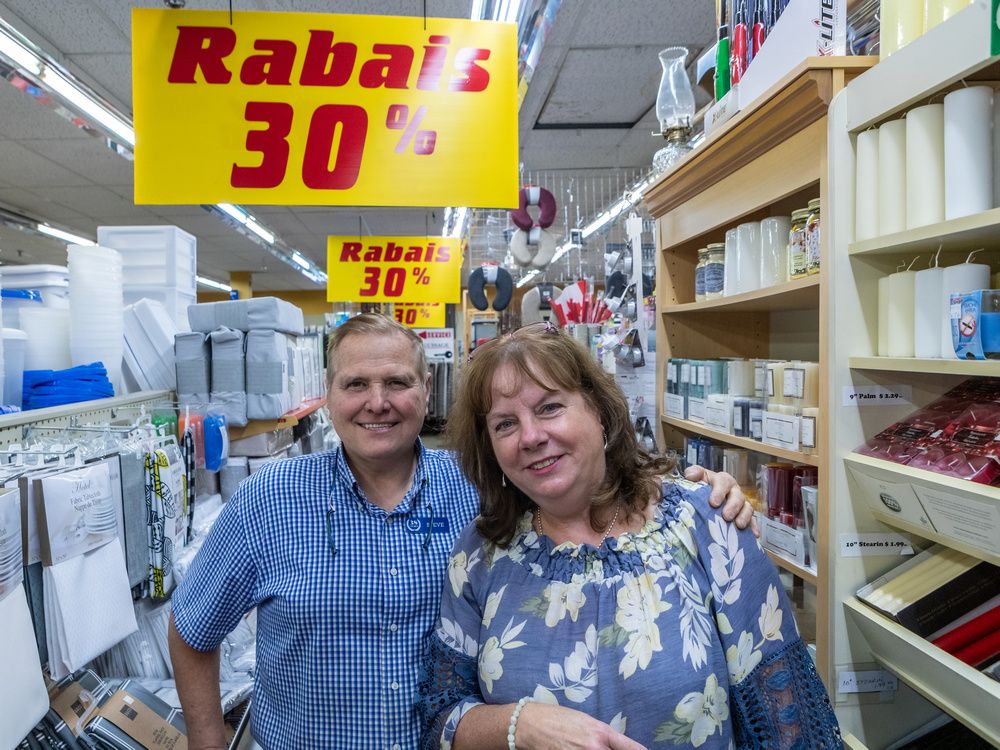 It’s the end of an era for Steve’s Hardware and Variety Store in Plaza Pointe-Claire.

After 40 years in business, owner Steve Naday and his wife Toni have decided to close their hardware store, the cornerstone of the mall that dates back to the 1950s.

Sign up to receive daily news from the Montreal Gazette, a division of Postmedia Network Inc.

Thank you for your registration!

A welcome email is on the way. If you don’t see it, please check your spam folder.

The next issue of Montreal Gazette Headline News will soon be in your inbox.

We encountered a problem during your registration. Try Again

Since the announcement of the store closure last week, customers have been flocking to Steve’s, which is selling its inventory at a 30% discount.

“Even though it wasn’t 30% off, I spent half an hour watching the whole thing,” said Tony Martin, a longtime Pointe-Claire resident.

Martin, 65, said the mall had undergone several changes since it opened in 1958.

“I was upset when the Ted’s Hobby store moved (into the mall),” he said. “But you knew Steve would eventually retire… everyone does.”

“I love this store,” added customer Sylvie Deschamps. “There are items you won’t find anywhere else and there’s a nice atmosphere. It’s original. You’ll still have Walmart and Home Depot, but it’s not the same thing.

Beaconsfield resident Liliane Lister was sad to hear the store was closing. “It’s very convenient for the people who live here. It is very popular.

Naday said there was no official closing date.

“We don’t know when it will close. It officially closes when the inventory disappears. I have a feeling that in six weeks we’ll be on our way.

“Unfortunately, there is never a good time to leave,” he added. “I hope many people will come to say goodbye or hello to me.

Since the store opened in May 1983, West Islanders have come to Steve’s for advice on home repairs. “Steve’s professionals can repair almost anything – from sharpening knives and blades to repairing lamps, cutting glass and more!” store website notes.

Steve Naday operated the store, which was divided between hardware and a variety of common household decorations, with his wife Toni Naday.

“It’s been our lives,” Toni said. “That meant meeting a lot of nice people in the community.”

She said uncertainty about the future of the mall and the lack of a lease precipitated their decision to close shop. She said the store’s lease expired in April and has not been renewed.

Plaza Pointe-Claire, one of Quebec’s oldest shopping malls, went up for sale in 2020. A deal to sell the property to developers fell through this year. The mall is currently zoned for commercial use.

Steve’s is located between Bluenose Collectibles and an SAQ liquor store. Some shopkeepers in the mall are still reeling from the recent murder of Bluenose owner Wayne Arnott and his wife at their Ile-Bizard home.

“Steve’s was an icon,” Thomas said. “It was a throwback to a time when you would go to the local hardware store for advice or something fixed.”

Thomas said there was no job too small or insignificant for Steve. “It’s a place where you go to have your screen door repaired; they would even give you tips on how to improve the operation of your lawn mower.

“Steve was a real old school hardware guy. He had that skill. He did house calls, he helped people with installations. It was truly a throwback to another era of hardware stores. And he built the variety store around those skills to stay afloat because old-fashioned hardware stores were dead. But he managed to keep it. It was appropriate that it be in the shops of Pointe-Claire because it corresponds to this era.

Steve Naday said it made sense to close after a final Christmas retail season.

“We did it at the end of this year because Christmas is a happy time. So my point of view is that if we can offer a good price to our customers who have been loyal to us, everything is positive.

Naday will continue to offer some handyman services through his mobile business: SuperSteve’s Screens and Sharpening at 514-649-5371.

The history of AI in 33 breakthroughs: the first “thinking machine”

Samsung Galaxy S23 – here’s how it can beat Pixel 7