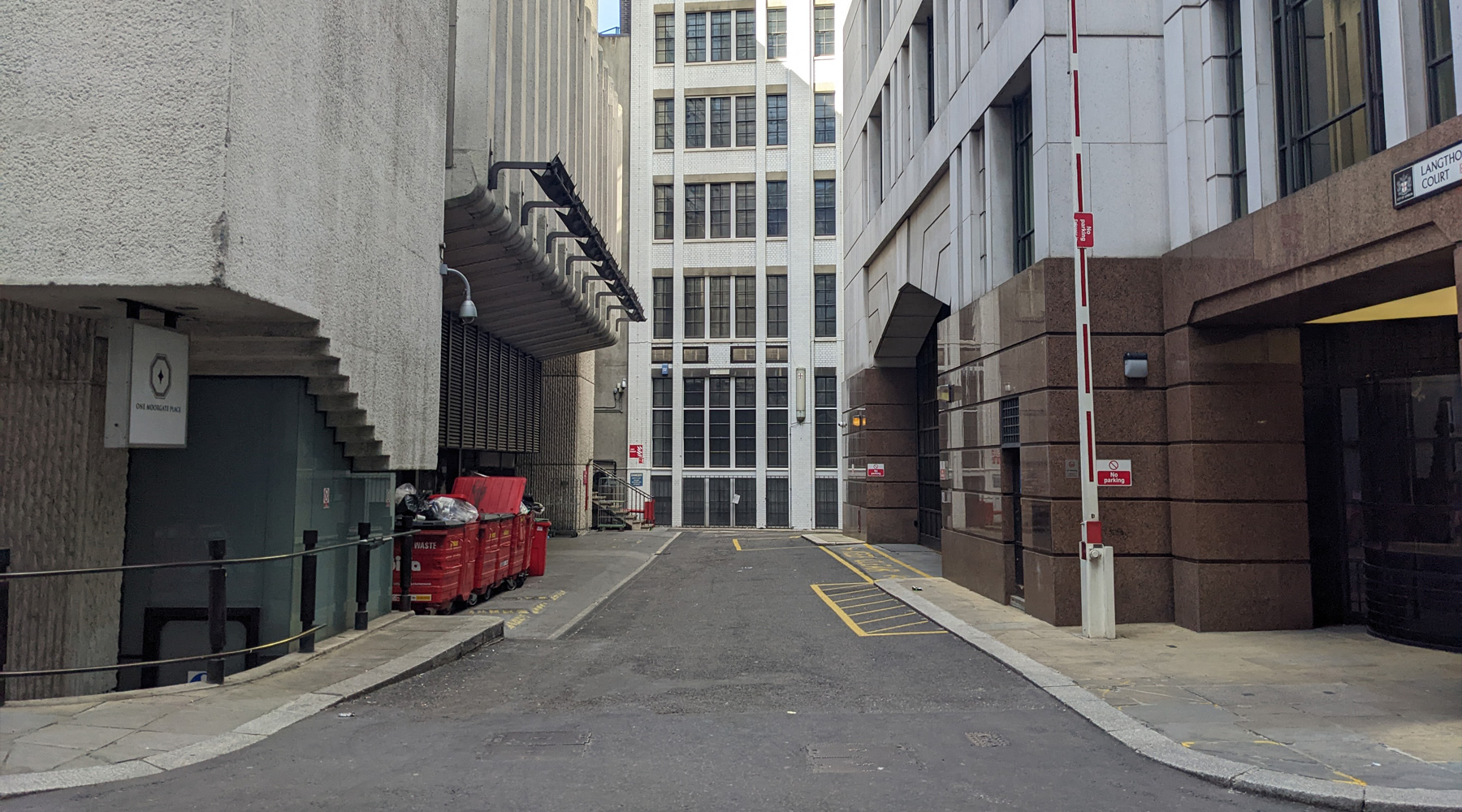 This is a small alley hidden behind the city offices that has a very confusing history over the nearly 400 years of its existence.

Once empty fields, the area was extensively developed in the 1650s, but was mostly a cluster of unnamed lanes and small houses, most with gardens. Slightly more detail appears on John Roque’s 1746 map, where the north-south axis of the alley is visible, such as Little Swan Alley, but the east-west axis does not yet exist.

50 years from now however, Langthorn Court is clearly visible on the 1799 R Horwood map, albeit slightly north of its present location. The alleys tend to shift around a bit due to reconstruction work, so it’s not a huge surprise.

At the time, it was a narrow lane lined with houses on both sides, and is said to be named after the man who owned the land. The houses are probably pretty basic, judging by the news reports which are mostly made up of criminal arrests and advertisements by bar staff and servants looking for work or landlords looking for tenants to rent rooms. .

A century later, the houses have disappeared, to be replaced by larger office blocks, and the lane has changed again. The old Little Swan Alley is now Cross Key Court, and Langthorn Court has moved to its current location.

It was, however, the expansion of the Institute of Chartered Accountants (ICAEW) in 1966-70 that was to create the alley as we know it today.

The ICAEW Building is split into two halves, the older 1890s building with large decorative stonework on the exterior, and behind it the 1960s Brutalist extension, designed by William Whitfield with Lowe & Rodin as structural engineers.

The side facing Langthorn Court is the surprisingly brutalist look of the building, with a mix of concrete structures, from the exposed staircase to the large ventilation shaft. At ground floor level, the building is dominated by bush-hammered concrete walls with vertical grooves which also run along the side of the service shaft.

Like all large halls it can be hired for events and is now a Grade II* listed building.

Opposite the brutalism of the 1960s is 25 Copthall Avenue, a newly refurbished 1980s office building that was originally built for Flemings Bank. The bank was founded in 1873 by Scottish businessman Robert Flemming to invest in American railways, but moved to London in 1909 and branched out into merchant banking. It struggled after the Big Bang in the City of London and was bought out by Chase Manhattan bank in April 2000. In the sale, around 130 members of the Fleming family pocketed around $2.3 billion for their 30% stake in the bank.

The bank moved out and the building, with a number of renovations since then, became offices for rent.

The lane itself is mainly used nowadays to access the two buildings facing each other. There are cargo delivery entry points for both and fire escapes, but the driveway is now unremarkable.

From an alley lined with houses and gardens, it is now just a short dead end for delivery drivers.