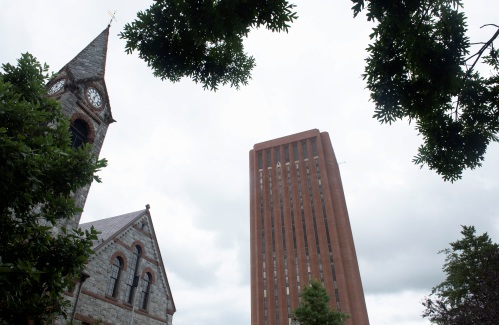 The Recorder – My Turn: UMass has the potential to leave a legacy in renewable energy protection

2019 has been a tumultuous year. This is the year COVID-19 hit. The year Boston experienced record heat. It was the year the Amazon burned down. Despite these obstacles, UMass Amherst rose to the challenge.

Through the persistent efforts of students from the Massachusetts Public Interest Group (MASPIRG), the Student Government Association (SGA), and other activist organizations, the administration formed the Carbon Mitigation Taskforce. It was the start of something really revolutionary.

The main objective of the Carbon Mitigation Working Group was to formulate a comprehensive and in-depth feasibility study to move UMass Amhert to 100% renewable energy for the heating, cooling and power systems of by 2032. Achieving this goal will be revolutionary not only for UMass Amherst but also for Massachusetts. because the university emits 14% of carbon emissions statewide.

The Carbon Mitigation Working Group established the CMP Core Planning Group, which is currently the working group. The CMP Master Planning group is made up of four committees: installations / implementation, business development, marketing and living lab.

The CMP Master Planning group has made significant progress in this endeavor. For example, they will work on conversion to low temperature hot water (LTHW), power transmission and a more sustainable design. In addition, there has been progress in hiring RMF engineering groups. There have been contacts with the Business Development Department which carries out high level research funding and investment opportunities at the state and federal levels.

The CMP Master Planning Group Living Lab is set to potentially receive a $ 300,000 Clean Energy Core expansion grant. The living lab was also instrumental in launching a pilot carbon literacy training program, the first US higher education institution to do so. They also created a campus data request form as a way to create a living laboratory for research and discussion on improving sustainability metrics on campus.

While there has certainly been significant progress, more action is needed. To achieve carbon neutrality by 2032, we must begin the transition now in 2021 through both concrete construction and meaningful public dialogue.

While we have an internal and informal commitment to transition UMass Amherst to 100% renewable energy by 2032, we have neither made a formal public announcement nor started building an infrastructure. based on renewable energy.

A formal declaration would allow other institutions to follow our example and hold the UMass Amherst administration accountable for its promises.

Indeed, finances are crucial to consider. Fortunately, the feasibility study has shown that the financial cash flow break-even point will occur around 2045 and the savings will continue into the future, but only if we invest in this important cause first. With this investment, UMass Amherst has the potential to leave a legacy by caring about sustainability rather than bureaucratic interests. In turn, we will be the leaders of the Commonwealth and of higher education.

It goes without saying that time will not stand still. We are currently going through a climate crisis and taking no concrete action will only hold us back.

Much work has been done by student advocacy groups. However, we will be stronger and more effective if we get the full support of the administration, especially with regard to the public declaration on achieving carbon neutrality by 2032.

Through a consolidated effort, we will create a more sustainable and livable future. Together, we can mark a revolutionary legacy.

Caroline Sunuwar is a graduate student at UMass Amherst who is the coordinator of MASSPIRG’s Break Free From Plastic & 100% Renewable Energy campaign and an ardent climate activist who believes in student power and the public interest. .

Plan will bring more reliable electricity to the northwest, Hydro One says