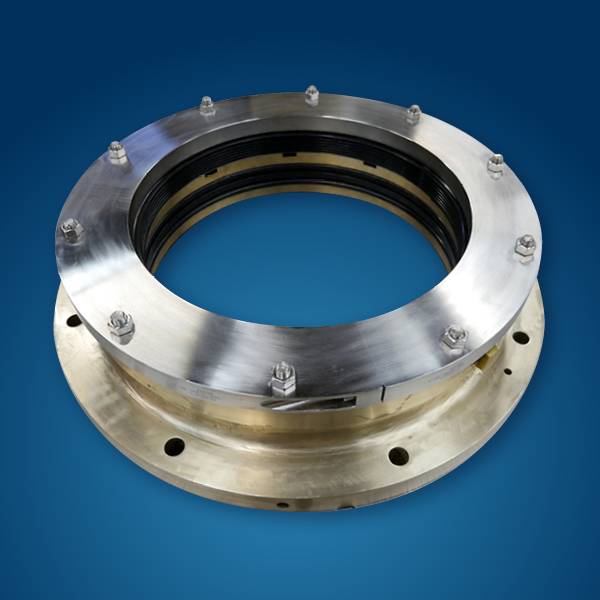 Thordon Bearings has launched a new propeller shaft seal for the commercial shipping industry with a unique Safe Return to Port (SRTP) design.

“At first glance, the Thordon BlueWater Seal may look like any other axial lip seal,” said Thordon Bearings Technical Director Anthony Hamilton. “But what makes this seal unique is its SRTP capability and revolutionary RENFORM main seal ring.”

This technology, developed in-house by Chief Research Engineer Gary Ren, allows the seal’s liner elements to operate with almost no friction. In practical terms, that means the seal is much better suited to variable and low draft conditions, Thordon said.

According to Hamilton, “The BlueWater Seal responds to the growing market demand for a complete propeller shaft line solution from a single source. Although we can offer the seal as an individual component, it is a fundamental part of the Thordon COMPAC open seawater lubricated propeller shaft bearing system.

The seal can be installed on all vessels with shaft diameters between 300 mm and 1000 mm (11.8 inches to 39.4 inches) and is simple to install, operate and maintain.

“This seal minimizes water leakage and dramatically improves hydrodynamic and lubrication efficiency,” Hamilton said. “The development is a real boon for shipowners and operators looking to adopt a seawater lubricated shaftline arrangement, as the entire propeller shaftline system can now be sourced of a single company.”

Thordon SRTP Technology, Scott Groves, Vice President of Sales, Thordon Bearings, said, “The introduction of our innovative sealing technology across the marine fleet means that a seawater is not only cleaner for the environment, but even safer for the ship and the crew. The seal includes an emergency Safe Return to Port secondary seal. This inflates in the event of damage to the primary seal, allowing the shaft to continue to rotate, allowing the ship and crew to return safely to the nearest port. I believe the Merchant Fleet has never had this ability before.

Craig Carter, Vice President of Business Development, Thordon Bearings, said: “While seawater lubrication is not a new technology, the BlueWater Seal definitely is and fits perfectly into the global maritime theme of international maritime organizations for 2022: “new technologies for greener shipping”. . It has also been designed in line with United Nations Sustainability Goal 14. Everything we do here at Thordon Bearings is aimed at creating a zero emissions vessel below the waterline and ensuring our oceans are clean, free of oil and grease.

Potential growth, share, demand and analysis of the Automotive Axle and Propeller Shaft Market by key players by 2027 – Instant Interview