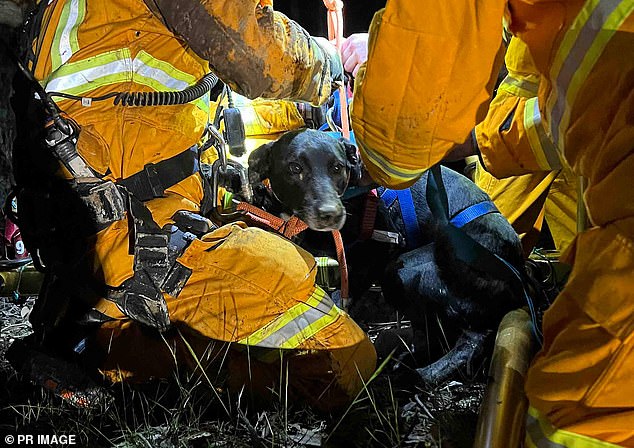 Two dogs were rescued from mine shafts by specialist Victorian-era firefighters in separate incidents within the same week.

Bruno the Arab bull was rescued by the Oscar1 brigade based in Bendigo on December 5 after falling into a mine shaft in Castlemaine Diggins National Park.

Less than six days later, the team were called in to rescue terrified Terry, the kelpie-cross from a mine shaft in Woodd.

“The owner said they were camping and the dog just went for a run, but since it was dark and you couldn’t see those mine shafts at best, he just fell down the hole,” he said. said Captain Daniel McMahon.

Captain McMahon said he was happy both incidents ended with a good result with no dogs suffering from injuries.

“It was a 15-meter well, but we figured it might have been a raised floor, meaning there could have been another 10 or 20 meters below if the ground sank. ‘was collapsed, “he said.

“Terry was surprisingly healthy, but uninjured, so we tied him to the ropes and Woodend’s Brigade helped lift him up.”

The Oscar1 Brigade trains for a variety of rescue situations including grain elevators, tower rescues and mines.

“Saving a dog in a mine shaft is serious work, but for us it is also a real world experience in case we are called to a community member in the same unfortunate situation,” said the captain. McMahon.