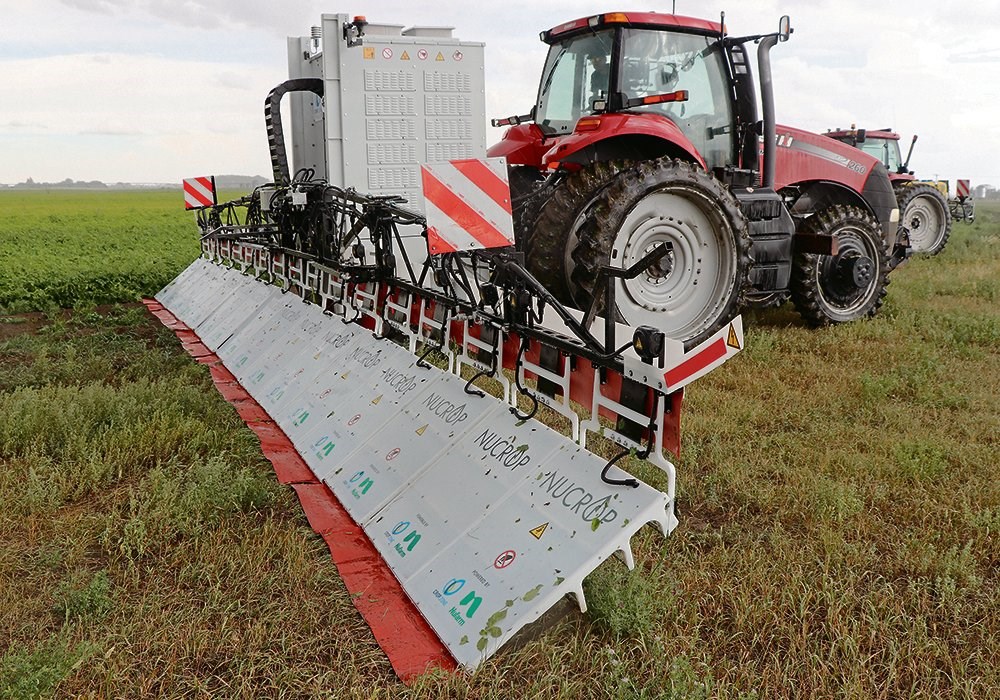 The electrophysical weeder uses spray to increase conductivity and electrical panels to kill weeds and crops.

BRODERICK, Sask. — An electrophysical weeder was used for the first time in Canada to terminate a potato crop.

An electrophysical weeder uses a combination of a product sprayed on a crop to increase conductivity and a machine that drags electrified panels over the plants to electrocute them.

The Crop.Zone system uses an applicator on the front three-point hitch of a tractor to apply product with 24-foot booms.

On the rear three-point hitch, a large PTO-driven generator is connected to 16 high-voltage transformer panels which also extend eight meters wide when unfolded.

Each 7 kW panel, which the company calls the applicator, distributes 1,600 to 5,500 volts to the plants it touches.

The electric jolt ruptures the weed’s cell walls so water can’t move inside the plant, and it follows the stem down to about two inches into the ground.

The protest took place at Sunrise Potato Farms, north of Broderick, Saskatchewan, last week. The start of the trial was difficult, because Crop.Zone could not find a tractor with a front and rear three-point hitch. A separate tractor was therefore used to spray the conductive product necessary to ensure good power transmission.

Benedikt Hayer works at Crop.Zone, based in Germany, and he said the product applied is a non-toxic conductive liquid that meets organic farming guidelines. It reduces the current needed to kill plants by softening wax layers and filling in plant irregularities.

“We built 14 machines last year as prototypes and had them tested in different countries in Europe. This year we started with mass production,” Hayer said.

“We built the machine to desiccate potatoes with electricity as an alternative to desiccation with chemicals.”

However, if the crop has a low biomass, the electrification-desiccation machine can operate at up to eight km/h.

Hayer said potatoes are hard to kill and in some cases two passes with the Crop.Zone are necessary.

The Crop.Zone system is used in Europe and is available through its partner Nufarm.

Hayer said it can be used in multiple crops and the company is also demonstrating it in a Canadian oat crop this year.

Research organized by Crop.Zone indicates that electricity has little impact on soil life, including earthworms.