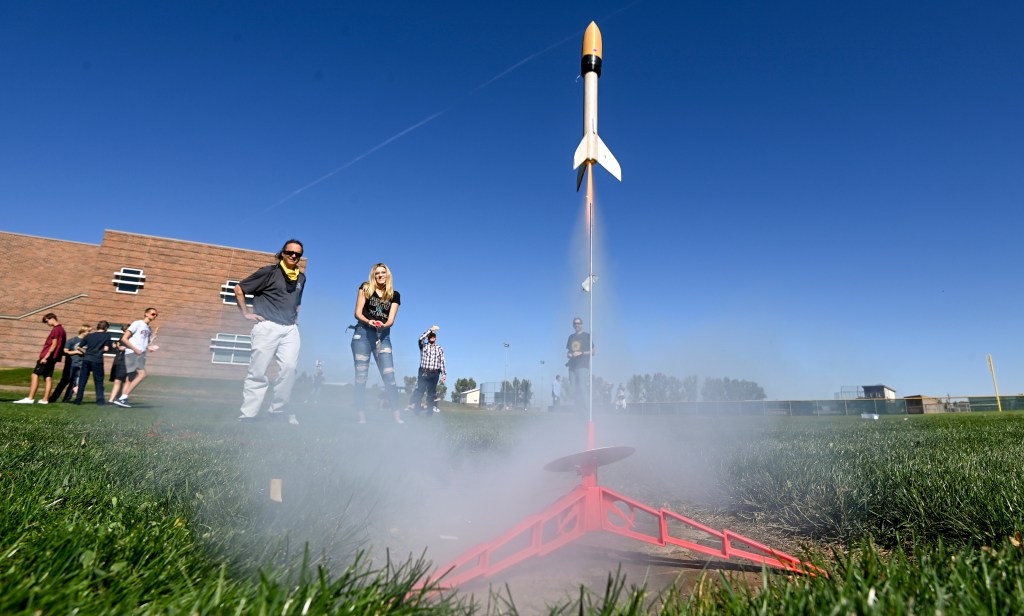 It was all about rocket science Tuesday morning at Windsor High School.

In a collaborative effort, students from two different classes in Windsor teamed up to build model rockets followed by a “launch party” on a high school lawn later that morning.

“It was cool,” said Gregory Del Bene, a 17-year-old senior physics student, after retrieving his rocket from the grounds of nearby Windsor Middle School, where it landed as the younger students were looking from behind a fence. “It’s a little broken, but I didn’t expect it to go perfectly.”

Del Bene and his fellow AP physics classmates from Brian Ash and students from Steve Cline’s robotics class worked together on rockets with the help of aerospace engineering science instructor Boulder from the University of Colorado, Matt Rhode.

After the rockets were launched, students collected data from a computer chip on a printed circuit board, called an arduino, located inside the nose of the rockets to compare the launch result with what the students had. predicted.

The rocket bodies were made of cardboard and balsa wood. Inside was an engine, parachute insulation. The students designed and built the nose cones with 3D printers.

â€œThis is one of the few opportunities to have a collaboration between the curriculum and the program,â€ Ash said. â€œIf you’re sending rockets to Mars, you need a team. “

Photos: Students build and launch rockets in collaboration with the University of Colorado at Windsor High School

At the end of the summer, Rhode reached out to Michelle Smith, Weld RE-4 School District Career and Technical Education Coordinator and Community Partnerships Coordinator, about the rocket project. He was awarded a $ 2,000 micro-grant through the university’s outreach and engagement office to purchase electronics and hardware.

Rhode said the rocket project is part of an introductory engineering course he teaches CU freshmen.

â€œIt’s such a fun project, I wanted to bring it to high school students,â€ Rhode said. â€œIt’s good for us to help serve our community. We try to bring that to communities that may not have the resources to do things like this.

Ash described the project as the fusion of theoretical and experimental science. His students were responsible for determining rocket performance predictions while Cline’s students built the electronic components to record the data.

â€œIt’s the relationship between science and engineering,â€ Cline said.

One of the students involved in building the electronic rocket platform was Alex Oakley, a 15-year-old sophomore, who is in Cline’s robotics class. Oakley, like Del Bene, called the launch a success.

She said she had been interested in electronics and computer programming since she was in college. Oakley received an email to join the robotics class this year and she jumped at the chance.

â€œI love this stuff,â€ she said. â€œI didn’t have the parachute (to get out of the rocket), but it went up high and I’m happy with it. The arduino survived.