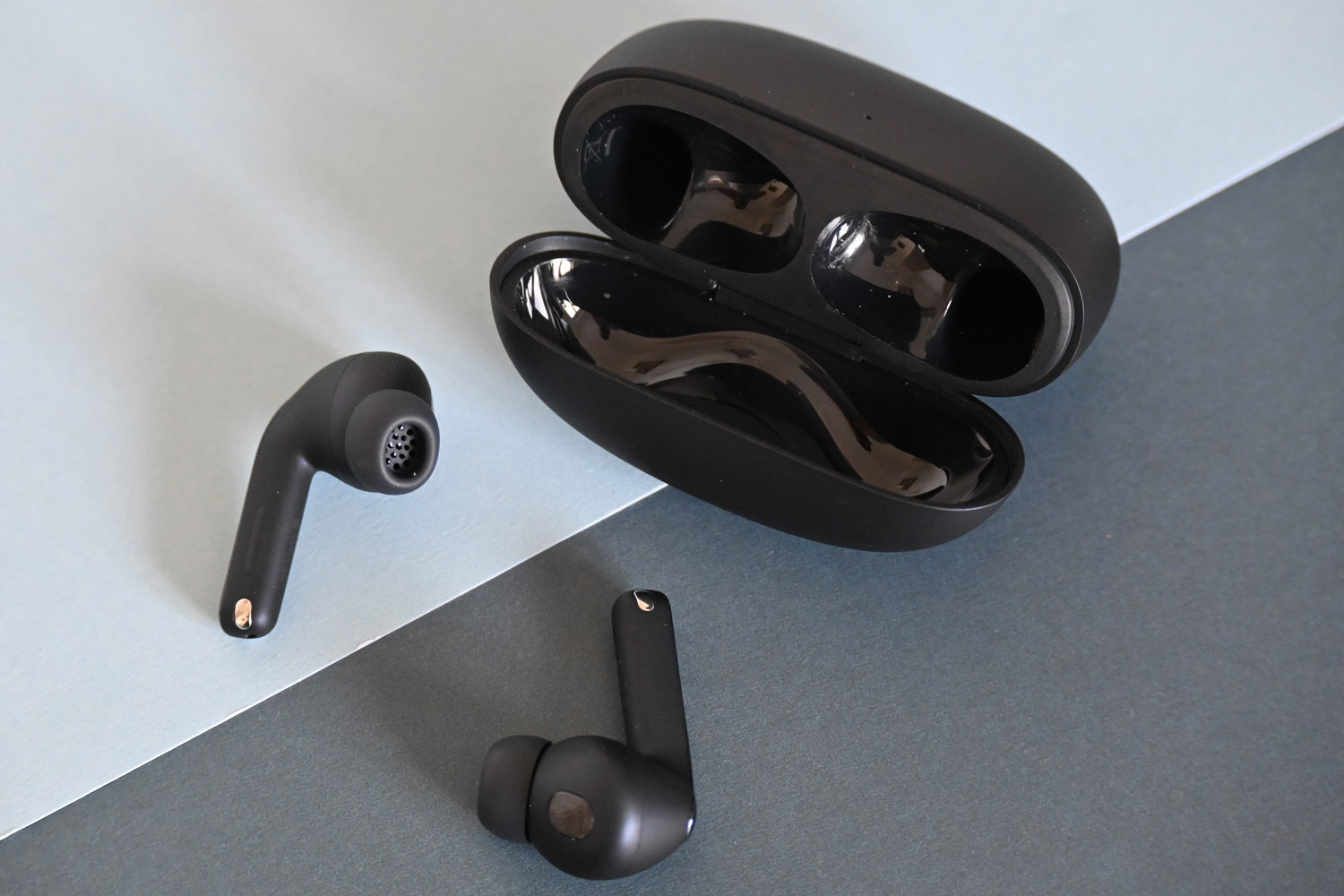 Wait, haven’t I seen you somewhere before? With a surprisingly familiar design, a similar feature set, and even the same name as a certain pair of Apple headphones, expectations are high for Xiaomi’s latest true wireless buds. Here is our review of the Xiaomi Buds 3T Pro.

They aim to undercut the AirPods Pro, while offering luxuries like spatial head-tracking audio – and still sound great in the process, with support for high-quality Bluetooth codecs.

On paper, it’s a real Apple alternative, but in practice, it risks borrowing too much from its rival, to the detriment of non-Xiaomi phone owners.

Impossible to escape it: the Buds 3T Pro look a lot like the Apple AirPods Pro. At least Xiaomi has opted for a matte finish on the pebble-shaped charging case. You can also have them in black, so they are not a complete clone.

The case hinge closes with a satisfying click and is slim enough to slip into that little pocket that every pair of jeans seems to have, despite the fact that no one has used a pocket watch since the 1800s.

The buds themselves are also Apple-influenced, with stems that dangle from your ear and interchangeable silicone tips that hold everything in place better than a pair of vanilla AirPods. They also isolate your ear canals from the outside world, helping with noise isolation and sound transfer. It’s a more comfortable fit than Google’s Pixel Buds, with no more pressure on any part of the ear – we could happily wear them for hours without any irritation.

They’re not safe enough for anything other than light exercise, but at least the IP55 splash protection will keep the music going if you get caught in a downpour while jogging.

Physical buttons built into the stems let you play/pause, skip tracks, and switch between ANC modes, but you really have to press them firmly to trigger every action. At least it makes it nearly impossible to accidentally do this when repositioning the earbuds in your ear.

Open the case next to a Xiaomi smartphone and a prompt appears asking to begin the pairing process. It’s quick and easy, but unique: you’ll have to pair the old-fashioned way to a handset from any other brand.

The Xiaomi 12 Pro we used for testing has built-in software that lets you choose from multiple active noise-cancellation profiles, enable dimensional audio, and customize each bud’s buttons. However, at the time of writing, there is no universal Android app in the Play Store to do the same on a non-Xiaomi device.

It’s initially hard to tell which ANC mode you’re in without looking at your phone, until you associate the different audio jingles with each setting. Transparency mode does a pretty decent job of letting sound come back, without overwhelming your tracks, and the default adaptive ANC mode responds quickly to changes in background noise levels.

While not the most effective noise cancellation we tried, the Buds 3T Pro did an excellent job of suppressing the background hum of a commuter train. It was less effective in a noisy office, with nearby voices still able to cut through the music, but it was still better working with ANC turned off.

Dimensional audio, spatial audio, 360 audio… whatever you call it, virtual surround sound on mobile devices is currently a minefield. Apple Music, Amazon Music HD, and Tidal all stream their own releases, but some are exclusive to certain devices, and the content library is barely extensive.

The Buds 3T Pro handle Apple Music’s spatial audio tracks convincingly, but no more so than any other headphones. You can choose directionality in well-mixed tracks, but poorly-mixed ones sound just as muddled here as anywhere else.

The optional head tracking is meant to compete with Apple’s AirPods, but it feels like a gimmick right now. It takes note of your head position when you press play, then changes the soundstage when you turn, but the effect is like putting a speaker right in front of you and then turning away from it: things get more loud in one ear and quieter in the other, with unwanted extra reverb and over-emphasized bass. Turn it off and the audio balance is much improved.

Generally, the Buds 3T Pro sound punchy, with plenty of body and a nice weight in the low end. They’re certainly tuned for mainstream tastes, rather than audiophiles, although the bass is still quite tight. He manages to avoid drowning the rest of the mix in the beat of The Prodigy London championsand does not unbalance the delicate and disturbing chords of Burial brutal sleeper.

There is a slight lack of precision at the very top of the spectrum, with the hi-hats and cymbals of Royal Blood Monster not quite having the impact we were hoping to hear. The stereo soundstage also feels much narrower, although instruments still have good individual separation.

No pair of true wireless in-ear headphones will go through the day without at least one visit to their charging case, and the Buds 3T Pro are no different. The buds themselves are good for up to six hours of playback, depending on the settings: we managed just over five hours with ANC on but other settings like head tracking turned off. It’s about what you’d expect from the AirPods Pro, but lagging behind Sony’s excellent WF-1000XM4.

The charging case can provide an additional 18 hours of listening time before needing to recharge itself. That’s not too far off what Apple claims for the AirPods Pro, but short of the 30 hours promised by the 3rd generation AirPods.

Ten minutes inside the case should provide enough charge for around an hour of listening, and the case itself takes around an hour to fully charge from empty, which is broadly comparable to rival true wireless earbuds. Support for Qi wireless charging lets you charge without a cable, which can be handy if you have a smartphone capable of reverse wireless charging and you’re caught short-term away from a power outlet.

The gimmicky head tracking alone is no reason to buy a pair, however, and without an app to control many of the more advanced features on non-Xiaomi hardware, it’s hard to recommend them at this time – at unless you also plan to pick up a Xiaomi 12 Pro very soon.

If better universal support is coming, however, there’s a lot here that Apple-envious Android owners will appreciate.

Despite shortages, network hardware market grew strongly in 2021 • The Register

Who can you turn to if you want to make your own chip? • The register